I make no secret of the fact that half the time I can barely remember what I ate for dessert – or even if I ate dessert at all. My penchant for all things alcoholic replaces any kind of a sweet tooth I may once have had; and if I do indulge in something sweet, there’s a good chance that the wine will completely obliterate the memory (wine and sugar don’t mix – in my body anyway, at least). The Honey Badger and I are collectively known as “the little couple who can drink”, because while we’re by far the smallest in stature among our friendship group, we are always the last ones standing at the bar. At some point our livers and waistlines are probably going to catch up with us, but let’s make hay while the sun shines, eh?

All this is background, though. My general point is: I’m qualified (possibly over-qualified) in the business of drinking in general, and drinking in Amsterdam in particular. And since drinking and eating are so closely related – both such tempting pleasures of the flesh as they are – I present to you: 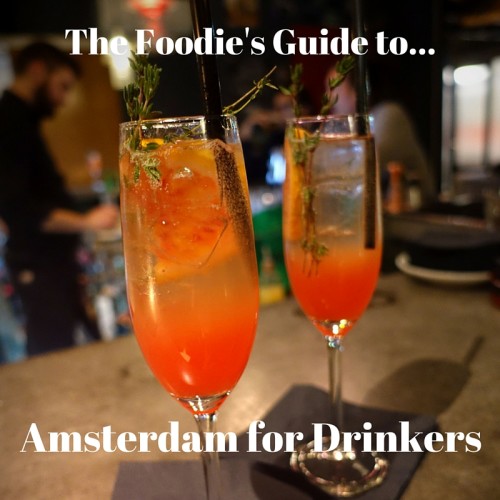 Ten years ago, you could barely find more than a weak cosmopolitan or an overly sweet mojito in Amsterdam (although just over five years ago, I did manage to come up with this Cocktail Bar Top 5). Nowadays, all sorts of bars are doing cocktails – and doing them pretty well. These are my current favourites:

Kevin Bacon Bar – The definition of off the beaten path, this is a hotel bar (bear with me) adjacent to the weirdly awesome Hotel Not Hotel, in a decidedly residential area of de Baarsjes. As you sip your Kevin Bacon Old Fashioned (made with bourbon infused with bacon – what more could you ask for?), you can gaze out at the camper van or the tent sitting slap bang in the middle of the hotel building. I secretly want to not live in Amsterdam just for a week, so I have a legitimate excuse to stay in this place. But enough about the crazy hotel: Jeen and his bar staff do a great job mixing up the perfect martini, and generally charming everyone who walks through the door. And since they added Thai food to their menu, there’s now a regular clientele of locals as well as hotel guests. Try the “Pear-shaped Scotsman” (my latest favourite, and pictured below) or the “Lime Leaf Lemongrass Martini” for Asian-spiced, aromatic drinks with more than a touch of class.

Tales & Spirits – I have to admit that the food has gone a little downhill since I first reviewed this back-alley bar and restaurant back in 2012. But their cocktails are still some of the most creative in the city. I get a “Smoke & Mirrors” every time I visit: it comes on a shiny, silver-mirrored platter, topped with a glass dome filled with smoke. The waiter lifts the dome (all 80s-restaurant style) and the smoke infuses both into the drink and right up your nose. It’s a sipper of a cocktail and I can only really deal with one per evening, but it’s totally worth it for the experience. Other favourites include the “Little Miss Troubles” (because who can resist a name like that?) and the “Fallen Lady” – in honour of the bar’s red-light neighbours of the night.

Café Panache – In all honestly, the first time I went to Café Panache I had a fruit juice. I kid you not. I had a Pilates class afterwards, and even a seasoned drinker such as myself is not au fait with performing upper-ab curls with a belly full of liquor. Fortunately, a few weeks later, I went back and had a margarita. It was delightful, and so was the venue.

In de Buurt – I’m not recommending In de Buurt for cocktails in general (I’ve not tried them, if they have any), but this homely café does serve a lovely Gin & Tonic. I generally go for one that involves a slice of orange and some spices, but I can’t for the life of me remember what it’s called. This spot is particularly handy (also for some tasty nachos to share) if you’re going to a concert at the Paradiso. It’s right in the heart of the Leidseplein, but somehow manages to feel neither touristy nor overpriced.

Porem – Handily close to the Nieuwmarkt, Porem used to be a reservations-only speakeasy but you can now just walk in off the street (so long as you can find the right doorway – it’s not exactly clearly marked). Once inside, you’ll find excellent service, a refined-meets-relaxed atmosphere, and some expertly made drinks. I’m a fan of the Term Paper – smoky from the Mezcal, fresh from the lime, and luxurious from the chocolate. Also high on my list came El Mariachi, comprising tequila (always a good pick-me-up!), Chartreuse (which somehow makes me feel like a naughty French girl), pear, lime and nutmeg (oddly, the latter tasted more like pepper on the drink; but either way, I loved the spice). Porem is a good choice either for a pre-dinner aperitif or somewhere to get cosy on a late-night date…

Honourable mentions also go to Hiding in Plain Sight and Njoy and Vesper – I still love them, but I’ve written about them before.

Here’s where to enjoy it:

Wester Wijnfabriek – Opening last summer in my very own Westerpark, Wester Wijnfabriek was an instant hit with the Honey Badger and me. Its copper wine racks even inspired those that we later built in our new apartment, such was the impression it made. Order a bottle of sophisticated pinot noir, a sparkling pear wine from Normandy, or anything in between (their wine list is huge). Pair it with a plate of French charcuterie or rillettes, or knock yourself out with a Cuban sandwich. It’s all awesome.

GlouGlou – Officially the cutest wine bar in Amsterdam, GlouGlou is the very definition of gezellig. I can happily while away an evening here, starting with after-work drinks and progressing steadily into late-night “ohhh, just one last round then” territory. I’d like to tell you what to order, but I always seem to go off-menu with some ad-hoc recommendation or other from the nice barman.

Paulus – No further than a couple of blocks from GlouGlou, Paulus is a rather more modern, hipster alternative. But no less helpful when it comes to making off-menu recommendations. They also offer a selection of cold cuts and cheeses to keep the tipsiness at optimum level.

Boelen & Boelen – Also in de Pijp, you could realistically do a wine-bar-crawl of the area encompassing GlouGlou, Paulus and Boelen & Boelen in one evening. I’d recommend finishing up at Boelen, however, because they also do dinner – real dinner, not just hapjes. It’s not cheap, but it’s very good quality French food and the service is extremely attentive. For what it’s worth, you can read the review that I wrote nine years ago – obviously, things have moved on since then, but I still recommend it as one of the top French restaurants and wine bars in Amsterdam.

Worst Wijncafe – My go-to place to eat in Amsterdam for the past four or more years, Worst is everything I want in a restaurant: a) it’s not just a café/restaurant, it’s also a wine bar; b) I can phone up at half-an-hour’s notice and they generally still have space to fit me in; c) they do sausage, and they do it really, really well; d) every Friday night at around 10 pm, they open a magnum of something super-special and sell it by the glass at cost price – it’s one of the best ways to taste a wine you’d never be able to afford otherwise; e) it’s within walking distance of my house. Bonus!

While I like a cold beer on a hot day as much as the next person, I don’t consider myself any great hops connoisseur. So for this section, I enlisted the help of my beer-expert friend Shoshannah, author of the wildly popular blog Awesome Amsterdam, and founder of Amsterdam Craft Beer Tours. She knows her stuff!

Troost – Opposite my local wine bar Wester Wijnfabriek, Troost was another brilliant addition to the Westerpark last summer. They brew their beers right there in the brewery (you can see all the huge metal vats behind the bar as you sip your beer) so you can’t get any fresher. My personal favourite is the “Amber Ale”, but fans of a bitter IPA, a fresh white beer, or an autumnal bock beer won’t be disappointed either. Oh, and they do burgers. And as we all know, beer and burgers are a match made in hoppy heaven.

In de Wildeman – In Shoshannah’s words: “Classic never goes out of style. In de Wildeman is a traditional biercafe with an amazing selection of local and international beers. A haven for the real beer fan. Their selection changes on a daily basis and they regularly host tap takeovers and special events.”

Arendsnest – In Shoshannah’s words: “Any visitor to Amsterdam should visit this temple to Dutch beers. They only have beers from the Netherlands at this tasting room but you’ll be amazed at the variety. Arendsnest have around 30 beers on tap and more than 100 varieties in bottle. I love the uniformed staff and gleaming copper pipes at this elegant bar.”

Oedipus Brewing – In Shoshannah’s words: “An innovative young brewery located in Amsterdam Noord, Oedipus is the place to be on the weekends and for their many special events. These fellows combine their love for beer with their enthusiasm for music, food and fun. Although you can find their beers all over town, the brewery is the place to go for special seasonal beers you can’t taste anywhere else.”

Delirium – I’m torn about including this American-style bar near Centraal Station, because the service there leaves a lot to be desired (we waited literally 45 minutes for a beer). When it came, however, it was worth drinking. You can order a flight of five beers that range from light and summery to dark and caramel-heavy. My favourite was the Delirium Tremens, which I’ve subsequently spotted (and ordered) in a couple of other places. So if you want to skip Delirium’s dodgy service, I suggest you sip on a Tremens while you play a round of bowling at Lovers Powerzone next door.

Honourable mentions also go to Gollem, Zotte and de Prael and IJ breweries, which are still awesome but appeared in my earlier post about the Top 5 Amsterdam Beer Cafes.

Best Restaurants in Amsterdam – the 2022 edition!