The silent partner behind the Amsterdam Foodie website is my brother – programmer by day, foodie by night. You never hear from him on here, but he actually built the whole site. He also accidentally named my entire brand by buying me the URL amsterdamfoodie.nl as a Christmas present in 2006. And why is any of this relevant to Valencia? Well, he’s been digital-nomading there – and I went to visit him. Not surprisingly, then, he gave me the foodie guided tour of one of Spain’s sunniest cities – tapas, paella, horchata and more… And that’s why I’m able to bring you my Foodie’s Guide to Valencia Restaurants, now updated in 2018, 2019 and 2021.

13 Must-Try Food and Drinks in Valencia Restaurants, Bars and Markets 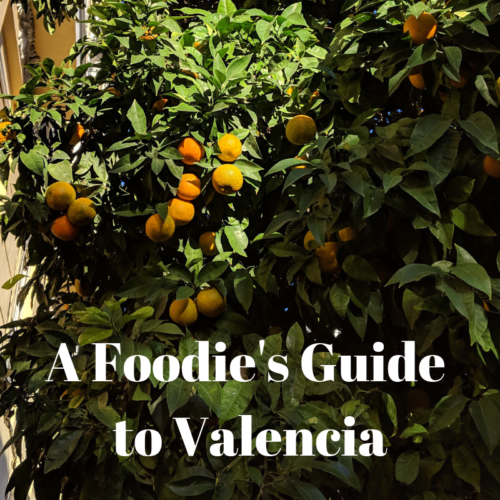 Valencia’s central market is just as impressive as those in many cities five times its size. The building itself is architecturally beautiful, even before you’ve got to the food. Grab yourself a bocadillo de jamón (such a sexier way to say a ham sandwich!) while you wander round the stalls selling the very best jamón Iberico, Spanish cheeses, fresh fish, olives, nuts, dried fruit and of course garrofó – the mysterious beans you find in paella…

Just outside the main entrance to Mercado Central you’ll find a typical Valencian stand selling a drink called horchata (or orxata, in Valencian dialect). It tastes a little like sweetened almond milk, and it’s made by burning and grinding chufa beans (more mysterious beans – the Valencians seem to love ‘em). The drink is traditionally served chilled with fartons – much like iced buns – and you can get them from L’Orxateria as a pick-me-up between sightseeing in the historic centre.

At the opposite extreme to street food is the exquisite fine dining at Karak. Bang in the centre of the old city, this modern restaurant is the brainchild of the extremely talented Rakel Cernicharo. We tried her ten-course tasting menu, which was a creative fusion of European and Asian flavours – playful but still recognisable. One of my favourite dishes was the shrimp ravioli with red curry sauce, seaweed and a garnish of fascinatingly sour green leaves – a veritable flavour bomb. Beef tataki with beurre noisette, hazelnut sauce and leeks (pictured below) was delicate and subtle by contrast, but no less delicious for that. While Karak’s signature dish of salmon cured for four days in soy sauce with sushi rice and kimchi cream was an umami hit.

What’s more, the sommelier was very knowledgeable about suitable wines to pair with the dishes, and you get a great view of the kitchen if you sit at the long communal tables upstairs. From what I experienced, Karak should be heading for a Michelin star…

On my first evening in Valencia, we went to Rincón de Roberto in the Gran Via neighbourhood for tapas. Despite the fact that it was 9.30 at night because I was on the last flight of the evening and I’d come straight from the airport, we were still almost the first people there. When you come from a country where most of the population eats their dinner at 6 o’clock sharp, this is quite the culture shock! Still, late-night indigestion aside, the tapas at Rincón de Roberto is fantastic. I particularly liked their version of Valencia’s famous esgarraet – roasted red pepper and aubergine salad with cured tuna and hard-boiled eggs – as well as their artichokes a la plancha (when in season) and their grilled squid with potatoes. Simple but perfect.

A few days before I arrived in Valencia for the first time, chef Ricard Camarena won a second Michelin star at his eponymous restaurant. But for those of us who don’t have the funds to splash on Michelin-starred dining, Camarena also has a couple of more affordable restaurants in the city – including Canalla Bistro in the hipster Russafa neighbourhood. Think international fusion tapas that isn’t afraid of bold, spicy flavours. I particularly loved the Peruvian-style seabass ceviche and the Asian-style tuna tartar, but literally everything we ordered was delicious – including the veggie dishes like spicy aubergine and vegetable tempura. Despite Camarena’s culinary caché, dinner at his bistro was extremely affordable (especially by Amsterdam standards).

In the same neighbourhood and a good alternative if you can’t get into Canalla Bistro is La Tasqueta del Mercat – close to Russafa market, as the name suggests. Each lunch and dinner time, they have a few set menus that are extremely good value for money. We paid €22 for a nine-course menu (this little Amsterdammer’s jaw dropped!) plus only a few extra euros for fabulous Ribera del Duero wine. I especially liked the bacalao croquettes that were crunchy on the outside and fluffy on the inside, as well as the tuna tartare with chilli and peanut sauces served with crisp corn tortilla. Plus, the chicken-liver pâté with focaccia and pickled onions was simple but perfectly prepared.

On the opposite side of Av. Del Regne de Valencia from Canalla Bistro, on a wide open square, you’ll come across the joy that is La Chipirona. I had the pleasure of eating there for my birthday, which meant that my brother was paying – yay! Dishes are designed to be shared, and share we did. Peking duck sushi, smoked aubergine with tahini, spicy seafood balls that were like Spanish bitterballen… And that’s before the incredible chuleton (ribeye) we tucked into for our beefy main course with grilled Padrón peppers and potatoes. The house wines by the glass were exquisite, too – ideal for sipping outside on the terrace.

Coffee and cake at Café Artysana

If you find yourself in Russafa during the afternoon, looking for either a caffeine fix or somewhere to work on your laptop for an hour, pop into Café Artysana. Good coffee, tasty cakes, and chilled atmosphere to read, chat, or catch up on your emails. I’ve heard they also do brunch…

In Valencia’s central El Carmen neighbourhood, picture-perfect Roman and Gothic buildings nuzzle up against colourful street art and sunny terraces. But one of the more traditional bars in the area is La Pilareta, where the mussel shells are still thrown into crates in front of the bar as the staff have done for decades. Better than the mussels, however, were the montaditos: halved, toasted bread rolls topped with grated tomato plus other variations. We tried the morcilla (blood sausage) and the chorizo, which tasted a lot better than they look in this picture!

While many versions of paella are made with various seafood, Valencia’s very own version is made with meat: chicken and rabbit, to be precise. This seems a little unintuitive given that Valencia is right by the sea, but since the city is reputed to be the birthplace of paella I’m not going to argue. That being said, we did cycle to El Cabanyal neighbourhood by the beach to eat ours: La Pepica is one of these large, seaside-y places whose décor doesn’t look like it’s changed much since the ’80s and whose clientele have clearly been coming here for decades as well. Their Paella Valenciana is a specialty, and comes according to the traditional recipe with garrofó (a large variety of butter bean), their green bean counterparts (like runner beans but larger), and plenty of aromatic rosemary and saffron.

If you prefer your paella with seafood, you’ve got plenty of options along the beach too. We cycled the opposite direction, down south to Playa de Pinedo, which felt like the quieter half of the Valencian coastline. Stopping at Restaurante Maremar for a restorative cola, we decided it looked so nice that we’d pop back for lunch a couple of hours later. Their paella was everything you’d expect: ocean flavoured and umami-sticky on the bottom of the pan. But their charcoal-grilled vegetables were possibly the stars of the show. Not to mention the uninterrupted views over the ocean…

Also in El Cabanyal, you’ll find queues out the door to get a table at Casa Montana so be sure to reserve in advance. This place is ultra-traditional, but in the best possible way: think mouth-watering jamón Iberico, silky Rioja and steaming piles of mussels. They also specialise in artisan canned fish, so we tried the razor clams – I was sceptical but they were briny and good. Also delicious were the young broad beans fried with lomo, the tuna cured in seven spices, and the red piquillo peppers stuffed with cheese, coated in flour and deep-fried. Go hungry because you’ll want to order everything on the menu!

While you’re in El Cabanyal by the coast, it’s definitely worth popping into cultural centre and hipster hangout La Fábrica de Hielo (literally translating as the ice factory). When I was there, the beer taps were flowing (with local beer Turia, among others), there was various street food on offer, and all this was accompanied by live music from a talented local duo singing and strumming.

You probably didn’t come to Valencia looking for Indian street food. But once you’ve gorged yourself on tapas and paella for a few days, you might be ready for something different. On the way to the up-and-coming Benimaclet neighbourhood, you’ll find a little hole in the wall called Karma Food & Drink. It’s very hard to Google because there’s a much larger Indian restaurant called Karma in Valencia, California. This Karma may be unassuming but it has the benefit of being in Spain – and being a hidden gem. We tried their dosa (right up there with ones I’ve had in London), chana puri (crunchy, sweet, spicy – little flavour bombs) and chicken tikka straight from the tandoori grill (smoky and well spiced). If you’re still looking for tapas or sushi, they serve that too – but I highly recommend you skip it and go straight to the Indian section of their menu.

Heading to Spain? If you liked this Foodie Guide to Valencia Restaurants you might like my Barcelona Food Guide too…

A Foodie’s Guide to Lille, France