Portland wears its politics on its sleeve. Black Lives Matter placards crop up on front lawns every other block. Bernie Sanders 2016 stickers are still proudly displayed on car bumpers. Portland even has bike lanes and pavements – it’s nothing like the America I know from the Deep South. And they’ve got all classy about weed and strip joints, in a way that Amsterdam’s never quite managed. But still: . It’s also hardly surprising that I felt right at home during the 10 days I was there. And that’s before I even got started on the eating bit…

Food in Portland is a serious business. As is coffee. And beer. The Portlanders (not Portlandians, as I kept calling them) have made fantastic food fantastically affordable. Of course, you can go out and spend a lot of money (especially if you drink wine) but the city does cheap eats particularly well. Not least because the food truck scene here is HUGE – Portland is home to dozens of so-called food cart pods throughout the city, where you can eat spectacularly for around €10. A huge number of Portland’s restaurants also offer Happy Hours – some of which run from midday till as late as 7 pm – during which you can score hefty discounts on a smaller menu of food and drinks. If you’re on holiday (especially if you have European jetlag), you can easily bar-hop your way through an entire afternoon just by hitting the Happy Hours. 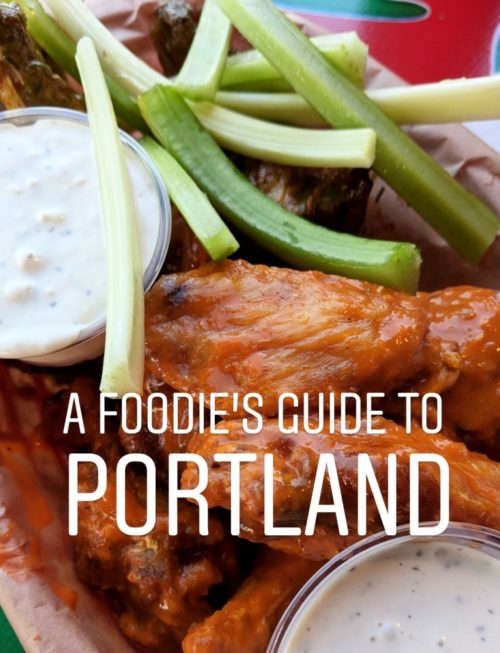 I’ve split this Portland Food Guide up into a number of bite-sized sections – there’s no particular rhyme or reason to them other than as a way to categorise what I consumed. Which was a lot. I was staying near North Mississippi Avenue, which means a predominance of my picks are in the North/Northeast neighbourhoods of Portland. But if you happen to be on the other side of town, never fear – I’d venture to guess it’s pretty hard to go wrong when it comes to eating and drinking in Portland. The sheer quantity of independent restaurants, bars, breweries and coffeehouses (there’s barely a chain in sight) guarantees a level of competition that results in high quality and affordable prices. Just don’t forget to leave that 20% tip…

Rather misleadingly, Happy “Hours” generally seem to last half the day in Portland; at the very least, they’ll generally offer you a dollar off drinks, but many go much further. These were a few of my favourites:

Life of Pie – Margarita pizza for $5? Hell yeah! Life of Pie even makes their own mozzarella and bakes their pizzas in a wood-fired oven. You can’t say fairer than that for less than the price of a Starbucks. Beers and house wines are $4 each, and Happy Hour lasts from 11 am till 6 pm. Result! lifeofpiepizza.com

Tasty & Sons – Known for their brunch, Tasty offers breakfast-y dishes in the afternoon for rock-bottom rates. I had a polenta dish with sausage, melted cheese and a fried egg – perfect modern comfort food that went great with Tasty’s spicy Bloody Mary. (It was my first day and my body had zero clue what time it was – that’s my excuse.) tastynsons.com

Por Qué No? – Why not indeed! As well as a daily Happy Hour (3-6 pm), this Mexican taqueria also offers an extended version on Taco Tuesdays from 3 pm till closing. I tried their mezcal margarita ($1.50 off!) which was strong, smoky and spicy – just the way I like ‘em. The tacos (50 cents off) were excellent too: I particularly loved the camarones (shrimp taco) and the barbacoa (pulled beef taco). porquenotacos.com

Portland is food truck heaven – wherever you are in the city, you’re bound to see a little cluster of them serving up cheap eats at all hours of the day. They’re so popular, you’ll even spot food carts at the airport!

Mississippi Marketplace – I went to the Mississippi Marketplace food cart pod with one mission in mind: Matt’s BBQ. Reputed to serve the best Texas-style BBQ in Portland (I wouldn’t know, but it was darn good), Matt’s only recently moved to this location, which was dangerously close to where I was staying. I tried his brisket and it was blissful: the bark, the smoke ring, the fat, the flavour… all present and correct. I even got a lift afterwards from a friendly fellow BBQ-eating Portlander – but that’s a story for another time. The moral of it, though: people who love BBQ are awesome. mattsbbqpdx.com

Killingsworth Station – Another food cart mission, this time to the taco truck at Killingsworth Station. Tehuana Oaxacan Cuisine (nope, I don’t know how to pronounce it either) does a great line in soft, plump, spicy tacos filled with everything from pulled pork to fried shrimp. And their aji sauce is to die for. I’m pretty sure they serve other stuff too, but once you’ve eaten their tacos it’s hard to order anything else. facebook.com/tehuanapdx

Pine Street Market – Portland’s smaller, less jam-packed answer to Amsterdam’s Foodhallen is Pine Street Market: an indoor food court in the heart of downtown. Think quality over quantity: there aren’t dozens of food stands, but those that Pine Street Market offers are some of the very best. I tried a few different options, my favourite being the bibimbap bowl from Kim Jong Grillin’. This fusion food stand pairs American BBQ (I had beef short rib) with Korean flavours like kimchi and gochujang sauce… talk about an umami bomb! facebook.com/kjgpdx

The friend I was staying with is as much of a Ramen Head as I am, so on my second day in Portland we set off on Ramen Day. Yup, we ate ramen for breakfast, lunch and dinner. (I know.) Here’s what we discovered…

Kayo’s Ramen Bar – This was my favourite ramen spot in Portland (although it was the last we ate at), and I strongly advise you to go for the Tan Tan ramen, medium-spicy, with its punchy miso-and-sesame based broth, ground pork and fresh spinach. If you have room (and trust me, you do have room!) order a Tan Tan pork and pineapple taco, too. If you’ve never eaten a Japanese taco, you’re missing out. Wash it all down with a glass of sake – my favourite was called something suitably exotic like One Thousand Dreams. Worth every cent. kayosramen.com

Ramen Ryoma – Probably the cheapest and most cheerful ramen you’re going to eat in Portland comes from Ryoma – a fairly soulless restaurant adjacent to an Asian supermarket in a strip mall. But don’t let the atmosphere put you off: Ryoma does a fab spicy miso ramen with excellent noodles and char siu for only 10 bucks. ramenryoma.net

Boxer Ramen – If you can handle the idea of fusion ramen, Boxer takes a creamy pork-bone broth and traditional noodles but pairs them with smoky pork that tastes like thick-cut bacon and a soft-poached egg. It’s essentially an American breakfast in a bowl of ramen! Also not to be missed are their Okonomiyaki-style tater tots with bonito flakes, spicy mayo and tonkatsu sauce. boxerramen.com

I feel like Portland’s tacos deserve their own category, although in reality I’ve mentioned all three of these places in other sections of this food guide. For excellent chipotle pork tacos, be sure to head over to the Tehuana Oaxacan Cuisine food cart at Killingsworth Station (see Food Cart Pods above). For a sit-down restaurant vibe (but still incredibly casual) and killer margaritas, try Por Qué No? – they have a couple of different locations and a good Happy Hour (see Happy Hours above). And finally, if you’ve never had Japanese tacos, you absolutely must try the Tan Tan tacos at Kayo’s Ramen Bar (see Ramen above).

My Portlander friend is from Melbourne, which she argues is coffee capital of the world. But even she says that Portland gives the Aussies a run for their money. And I can’t say I disagree. The best coffee (in my not very educated opinion) that I tried during my trip came from Case Study (casestudycoffee.com) – the flat white was fruity and strong, the milk cap a perfect temperature. I also loved their spicy chai latte, which is saying something as I usually can’t stand chai! Another good bet is Ristretto Roasters (rrpdx.com), also with several locations throughout the city. And finally Stumptown (stumptowncoffee.com) – their coffee is a little bitter and dark roasted for my taste but many people swear by them, and they started right here.

I have it on good authority that Portland is also known as “Beervana”, and with good reason – the craft beer here is taken as seriously as everything else the Portlanders eat and drink. I didn’t get to visit as many breweries as I’d have liked in the end, but I would recommend the couple I managed to fit in. Base Camp (basecampbrewingco.com) offers a flight of six beers, which is great if you want to try a bit of everything. I liked their amber ale the best, but I appreciated the opportunity to take a sip of most of the menu (especially their signature smoky porter, complete with toasted marshmallow!). Also fun was Breakside Brewery (breakside.com) where Happy Hour lasts until 6 pm on weekdays, and you can try excellent pilsners and IPAs with a ginormous plate of nachos for a small discount.

Given how expensive wine is in Oregon (even the local Oregonian wines retail for well over $20 a bottle in shops and over $50 in restaurants), the cocktails seem surprisingly good value. Especially if you hit up a Happy Hour or two. I loved the house punch and the ancho daiquiri at Victoria Bar (victoriapdx.com), the old fashioned at Bar Bar @ Mississippi Studios (no website), the daiquiri at Keys Lounge (keyspdx.com), and the margarita at The Rambler (ramblerbar.com). All bars in Portland are legally obliged to serve food as well – so you won’t go hungry, nor get too drunk from drinking on an empty stomach. Tourist tip! Carry your passport as ID – I got carded several times (I’m 38 and look it) and passports are the only ID they accept from non-US citizens.

And finally, a couple more Portland restaurants that deserve a special mention…

Inevitably, I visited a few restaurants that didn’t fit into any of the categories above. But there were a couple that you can’t go to Portland and miss!

Pok Pok – A few years ago, I was given Pok Pok’s cookbook for my birthday by my Portlander friend. Visually, it’s a feast – and while I wanted to make dozens of the recipes, I was always too lazy to go in search of the hard-to-find ingredients. So top of my list of things to do in Portland was to eat some of the Thai food at Pok Pok that I’d pored over in the book so many times before. It didn’t disappoint. Go for the chicken wings alone – they are some of the best you will ever eat: sticky, sweet, salty, savoury, and moreishly good. The Thai sausage was also a hit, as was the dish of hot and sour catfish. Don’t ask me the names of any of the dishes we ate – they were each at least five words long and impossible to pronounce, let alone to remember. But whatever you order, I doubt you’ll leave disappointed. pokpokrestaurants.com

Fire on the Mountain – Maybe I have a slight obsession with chicken wings… At Fire on the Mountain, they come with a dozen different sauces, but go classic and stick to buffalo. With blue cheese dressing. Naturally. portlandwings.com

Visiting the Pacific Northwest? Check out my guide to 24 hours in Seattle!

A Foodie’s Guide to Valencia Restaurants