Please note that since writing this blog post, Yummie has closed down

Yummie has turned into Pho & Yummie, where you can eat not just sushi but also Vietnamese food – read the review!

Original review of Yummie sushi is as follows: Last week, I reviewed Michelin-starred Japanese restaurant Yamazato. The conclusion was either that it wasn’t all it was cracked up to be, or that I’m simply a philistine whose appreciation of Japanese food goes as far as sushi but not a lot further. Or maybe both. With that in mind, I was excited by the opening of a new branch of sushi restaurant Yummie in the Spaarndammerbuurt. Seeing as I’d passed by the place every day for months (Spaarndammer is my buurt), I’d been watching the renovations with curiosity since February. And frankly, if something took over six months to renovate, it’d better be good – right? 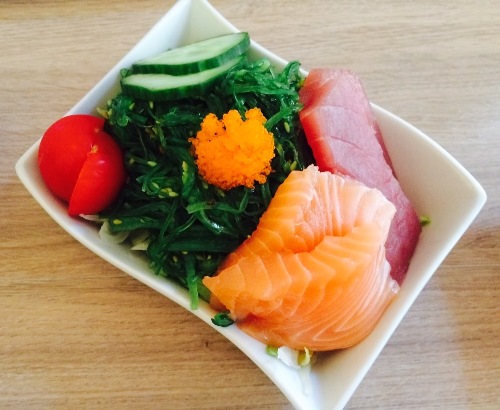 First up, a confession: I am hopeless with names of sushi. All those makis blend into one for me (see, I told you I’m a philistine) so I was relieved, therefore, that Yummie features handy pictures on their menu so you can figure out what you’re ordering. In some contexts, I’d call that tacky. In this one, I’d call it necessary. So of course, we ordered a whole bunch of maki (temaki, uramaki, futomaki – you name it) plus some salmon and tuna sashimi, gunkan (which were new on me – they’re bottom left in the picture below – the ones with fish eggs and seaweed on top), and later a few more hand rolls plus those inside-out California thingies. 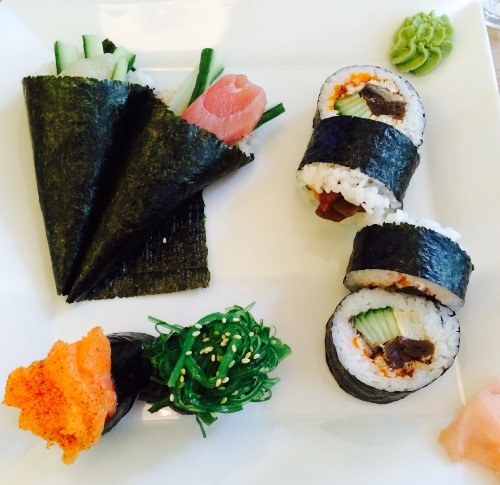 They were all, in a word, delicious. The fish was extremely fresh (which I guess is pretty much a prerequisite), but the sushi varieties we had were also sufficiently different to keep even the Louisianan Honey Badger amused. There was some of that teriyaki-style eel going on, and wasabi mayo, and spicy-hot powders – it wasn’t American-style sushi all the way, but there was definitely enough of it to keep things interesting. 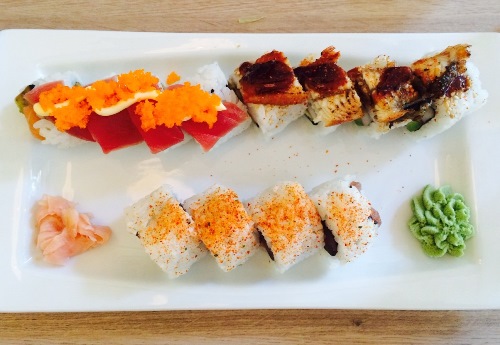 This little lot cost us €37, which is precisely 10% of what Yamazato cost me. I’ll let you draw your own conclusions from that. It didn’t include wine, however, because – despite the tantalising array of wine and bottled beer behind the counter, and despite the fact that it took them six months to open their doors to the public – Yummie doesn’t have an alcohol licence. I hate to judge, but – well – I’m an alcoholic restaurant critic, so I will.

For that reason, while Yummie does have several tables and chairs for restaurant diners, your best bet is to get your sushi to go and take it back to the comfort of your own living room, replete with whatever wine you’ve managed to stop yourself from drinking so far… (No? Just me then…)