Please note that since writing this blog post, Madrid has closed down

It was one of those weekends that started as it meant to go on. A Friday night trip to my favourite sausage and wine place (Worst) ended several glasses deep, and one rather embarrassing andouilette story later. (To cut to the chase: we thought andouilette was related to andouille sausage. We were wrong, but we were too proud and foodie to admit it – so we gamely munched our way through an entire acrid-tasting colon.)

We woke up feeling less than sprightly, and decided to cleanse our bodies through embarking on a virtuous-sounding “Vegetarian Day”. Now, you’ll be none too surprised to hear that these don’t happen very often in House Hampton. So we set to scouring Google maps for restaurants that would sate our desire to be healthy. We came upon raw food restaurant Alchemist Garden on the Overtoom, phoned up, and were there within an hour. So far so good, except for one problem: the owner, who told us he had two staff out sick the day before, and another two off that evening (it didn’t bode well for the food) decided that he “felt like” he “might want to close”. Not really having time to wait while the planets aligned or his auras instructed him further, we left.

A couple of blocks down the road, we found Cucina Frenzi – a sort of trattoria meets workshop space meets general hippie hangout. Since when did the Oud-West get so – umm – chilled out? We ordered a vege pasta bake (which was nice when it came the second time, but cold when it came the first) and a selection of three side orders, or “Happi tappi”, as the menu referred to them. I rest my case about the hippies. My favourite “tappi” was like a cross between ratatouille and caponata with big, satisfying chunks of aubergine and tomato. The tortilla of the day was pretty decent too. The cauliflower salad with sultanas and nuts was past its best, but at its freshest would have been delicious. The wine was organic – naturally.

Our healthy day was back on track. Or so it seemed, until our “wine tasting” at a cellar in Oud-Zuid with Wines in Amsterdam somehow went on until 1 am (at which point it would only be fair to call it “wine drinking”) and everyone woke up with (another) hangover. 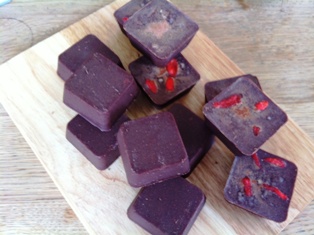 But fear not for our livers! Help was at hand in the form of a raw chocolate workshop put on by Bee’s Knees Kitchen: raw foodie contact of mine, who pepped us all back up with raw cocoa squares filled with goji berries, mulberries and almonds, and a “chocolate mousse”, which was actually made from bananas, avocado, almond milk, honey and more raw cocoa. We took some of the chocolate squares home afterwards – which is just as well, since raw cocoa is known for its anti-oxidant properties. (Phew.)

There’s no excuse for what happened next. Four beers and several bitterballen later (we stopped in at Café Bax “for a quick drink” – we all know where that leads), the munchies overtook us and we ended up in tapas bar Madrid. Despite (or perhaps because of) my slightly inebriated state, I can honestly say that Madrid served us some of the best tapas I’ve had in Amsterdam in a long time. We ate everything from stuffed piquillo peppers to fried courgette to baked shrimps to patatas bravas, sat outside on the pavement in the evening sun. I won’t go into the Rioja consumption, but suffice to say we were in three-day hangover territory.

Now, back in weekday reality, I am sitting at my desk eating quinoa salad with radishes, raw fennel and mango, with a side order of edamame beans. I am going for a run later. Honest.