Before I get onto the main purpose of this post (which is, of course, to review the next in a line of Mexican eateries after Burrito Maker and Caramba), can I just digress into film reviewing for a moment? Now, I know nothing about films, and am in no way qualified to critique them, but Man of Steel was officially the biggest pile of crap I’ve watched in years. And that’s probably doing a disservice to excrement. Which means that, in comparison, my pre-cinema dinner at the Original California Burrito Company was, without a doubt, the best part of my evening… Oh no, wait, the news that two of my friends had just given birth to a baby boy was the best part of my evening. But now I’m digressing even more… 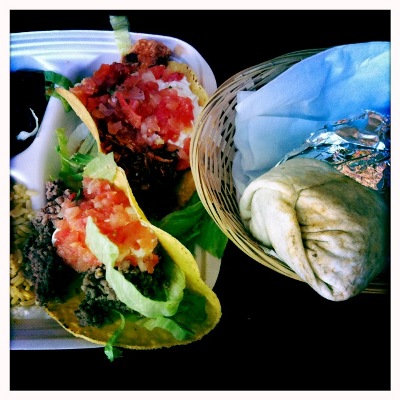 So: the Original California Burrito Company – a mouthful of a restaurant name by all accounts. And the burritos were quite the mouthful too: fatly stuffed with a spicy, smoky chicken sauce, plenty of carbs in the form of beans and rice, and all the extras you’d expect. I ate it with all the grace of a toddler at an ice cream stall, and licked my fingers afterwards.

But moving onto the tacos – which are, after all, the holy grail of which we are in search… The corn tortillas looked like they’d been fried on site, which should have been a good thing but made them taste a little greasy. The beef version was bland, while the chicken version was not as nice as its burrito counterpart (though it was hard to tell whether it was more or less the same sauce but with less spice). The side of rice was flavoured with saffron, which baffled me, and the side of black beans was over-seasoned with salt and rosemary.

Meanwhile, the coronas came with lemon instead of lime (a nod to the Dutch “wit bier”?!), and the salsa that came with the chips was a little watery. On balance, I preferred the Burrito Maker’s cleaner, fresher flavours.

Either way, the search for the perfect taco continues… Next stop: The Taco Shop!