Last week, I reviewed newcomer Burrito Maker on Haarlemmerplein. In one of the comments the post received, a reader suggested Caramba, which – it transpires – is anything but a newcomer. On the corner of Lindengracht and Lijnbaansgracht, I’d never really noticed it before, but when I asked how long they’d been around as I went up to pay at the end of my meal, they told me 25 years. So they must be doing something right, eh? 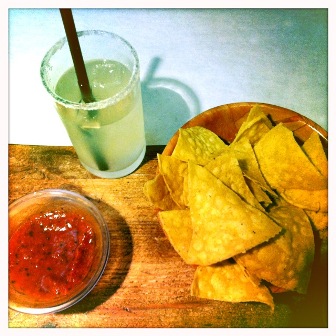 According to the aforementioned reader (thanks for the tip, Mac!) Caramba deals in “REAL homemade corn tortillas, tortilla chips, guacamole. Their margaritas are handmade to order by an old man, no high fructose corn syrup mix crap.” Not one to argue with such a tone of authority, I dutifully ordered a margarita while waiting for my chips and salsa. As promised, the margaritas were indeed made to order (by an old man, no less) – which meant that they took a little while to arrive but were also phenomenally strong. Probably not the thing to drink when you’re running 10 km the next day – but that was my boyfriend’s problem, not mine. (Ha.) The chips were also real corn, fried to perfection, with great salsa. So far so good.

Next, I ordered prawns in something garlicky – they were delicious but there were only three of them (a little stingy for nearly €10), so it was hard to decide whether I preferred them with or without the Guajillo dip. 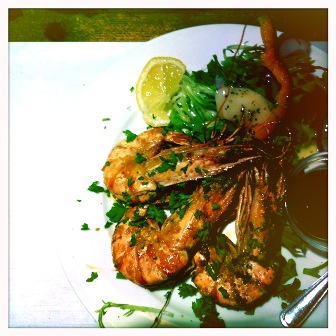 What followed was a general debate about whether Mexican food needs the authenticity factor to make it good, or whether it just needs to taste nice. The chicken and prawn fajitas were (according to the Tex-Mex Honey Badger) far too heavy on sauce to count as authentic, but I liked the flavours. The chicken enchilada was big on cheese and sour cream, but had a flabby, reheated texture.

And then for the fabled tacos, of which we were in search… Mine was made with pulled beef instead of ground beef, which could have been a good thing but instead was palate-clingingly dry. There was no sauce to hold together the meat and salad inside the taco shell, which broke as soon as I picked it up. Disappointing.

Unlike Burrito Maker, Caramba is more of a sit-down affair: its eclectic interior is filled with candles in cubby-holes and bachelors in bantering groups, which adds to an atmosphere of fiesta. It’s also significantly more expensive: you’re looking at €15-18 for mains, which include a small dish of beans and a side salad. All fine, but fundamentally unnecessary when all you’re really after is a decent taco.

Net result: a mixed bag. Do go (as Mac recommends) for the margaritas and corn chips. Don’t go for the tacos and the fussy extras. Sigh – the search continues…