Please note that since writing this blog post, Bulelani Smoke BBQ has closed down

I was lucky enough to be at Bulelani’s very first pop-up event, back in 2014. Their specialty, BBQ-smoked pork ribs, were such a runaway success that it was a logical next step to look for a permanent location. But restaurant hunting in Amsterdam (much like house hunting in Amsterdam) is hard: the best locations are snapped up by those in the know, leaving the dregs and the over-priced venues to the first timers. I’ve followed Ossie and Timo – Bulelani’s head chef and front of house, respectively – for the past three years, and know what a long journey they’ve taken to get here. So it’s with pride as much as with pleasure that I inform you they now have their very own restaurant: formerly Café Scrapyard, Bulelani is taking over the kitchen while Nick (Scrapyard’s owner) is still running the bar. All this was music to my ears.

My first Friday night at Bulelani, things were pretty much as I expected: excellent Korean-style sticky ribs (they do classic BBQ ribs too) with moreish homemade sides – think slow-cooked umami-bomb beans, refreshing mustard coleslaw, and homely mac ‘n cheese. Pair it all up with a feisty pickletini or a smoky old fashioned from the bar, then top off your evening with a couple of picklebacks (a shot of Bourbon followed by a shot of pickle juice – better than it sounds) and you’ve got a night of meat sweats and a morning of hangover – but hey, it was all worth it. 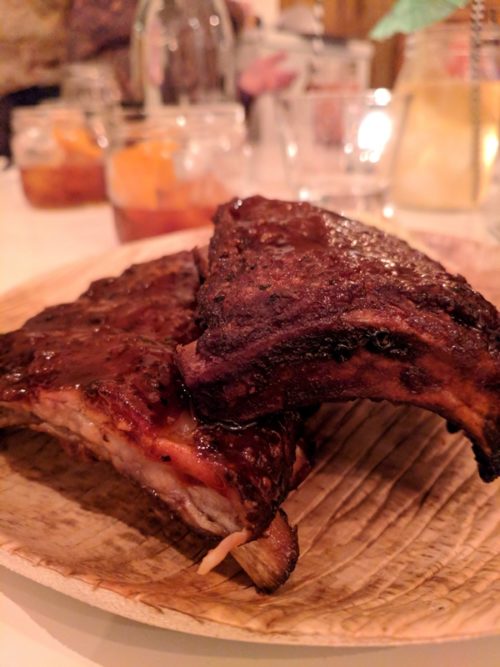 Things, however, were about to get even better. It was halfway through their third week of operation, and Bulelani’s Facebook page was awash with posts about “Wing Wednesday”. I didn’t need telling twice. Ever since my infamous Chicken Wing Election*, I’ve been hankering after hot wings – the real-deal Buffalo variety. But for whatever reason (too messy? too spicy?) I’ve not yet come across anywhere in Amsterdam that’s doing them – or at least not doing them well. That is until now. Just like their ribs, Bulelani is serving up two varieties of smoked chicken wings: one with homemade hot sauce, the other a classic BBQ version. Dip them in some weirdly cooling yet mustard-heavy Alabama white sauce and you might – just for a second, until you see the weather outside – forget you’re in Amsterdam.

*While Clinton and Trump were battling it out on CNN, we held our own electoral college vote of hot wings vs. BBQ wings at Amsterdam Foodie HQ, with voting live in the living room and across all my social media. Suffice to say: the result was much more satisfactory than the “real” election.

For those with a sweet tooth, Ossie’s baked cheesecake is a hit – especially when smothered in chocolate sauce and served on a skewer. Like the biggest cake pop you’ve ever seen. If you prefer your desserts to be of the liquid variety, you’re in luck there too – just start working your way through the cocktail menu. Craft beer lovers won’t be disappointed either.

When Bulelani first popped up three years ago, Ossie was pretty much the only chef in Amsterdam serving decent BBQ-smoked ribs. Now, there’s Pendergast and Carnivore and even a couple of other contenders that just about qualify. Having tasted Bulelani’s new hot wings, my money’s on the fact that at least a few others will follow suit in the next couple of years. But whatever happens, right now these guys are the first and only ones doing it. Which means I’ll be going back for Bulelani/Scrapyard’s particular brand of smoky ribs, spicy wings and killer cocktails again and again…

Kinkerstraat 24H (Oud-West) / CLOSED
share this b a comments