“Behind every creative is a corporate job,” said someone, at some point, I assume – because it’s generally true. At least, it is in my case: my restaurant bills for the past three years and eight months have been paid by a nice, shiny corporate salary, kindly granted to me for services rendered by a company I’ve affectionately dubbed “MegaCorp”. And so it’s with a little trepidation, a lot of excitement and a certain amount of blind faith, that I have a big announcement to make: I’ve quit my day job at MegaCorp. (I’ll tell you more about my future plans for seeking my fortune as a foodie in a couple of weeks, but suffice to say they involve food and Amsterdam and – most importantly – writing, since that’s more or less the only thing I’m any good at.)

Of course, there’s one major impact of all this life-changing-decision stuff, and that’s the end of the corporate salary. I’d gotten pretty used to expensive wines and the odd Michelin star, and the word “budgeting” wasn’t one I’d had to use much in the last few years. But now – with two weeks of my notice period left to go – I’m officially practising my budgeting skills. Clearly, being a food writer, restaurant reviewer and bar critic, eating and drinking less isn’t really an option. I’ve somehow got to eat and drink cheaper and smarter. But how?

“I’m sure ethnic cuisine tends to be cheaper!” I exclaimed to the Honey Badger in what turned out to be a horribly inaccurate generalisation; “let’s go and eat Indonesian!” So off we trot (trotted? trat?) to newcomer Restaurant Jun, just off the Hugo de Grootplein. I looked at the menu and started doing bizarrely Dutch things like – umm – comparing prices. “Hey, look at this,” I said conspiratorially to the Honey Badger: “if we get the two-course menu where we get to pick a starter and two mains plus a vege side each, that’s eight dishes between us AND it’s €2.50 cheaper than getting the rijsttafel!” 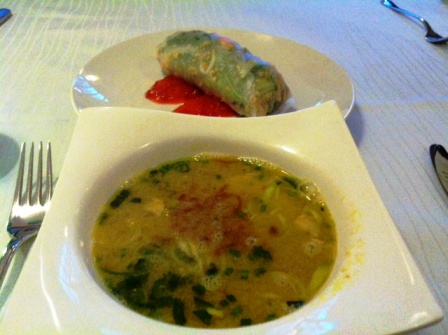 So we did. And jolly nice it was too. To start, we shared a spring roll, which was packed full of fresh flavours and wrapped in a perfectly prepared rice pancake (i.e. it was thin enough and moistened enough that it didn’t turn into that raw rice layer that sticks to your teeth). We also had chicken soup: the type that comes with a boiled egg and is bright yellow with turmeric and is almost medicinally satisfying. 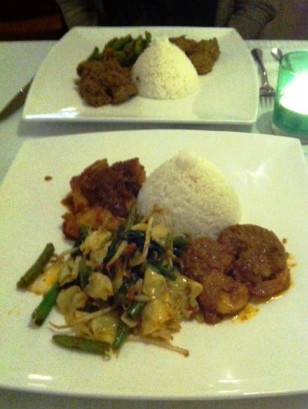 We split our mains into a meaty variety and a fishy one. Both were spicy (not too spicy – afterwards the proprietor told us his Dutch customers often didn’t like it too hot – we told him we’d happily take on more chilli next time) and, if I’m honest, a little too salty. There’s no need for that much salt when there’s already so much flavour from the spices. However, the Rendang was an aromatic triumph, and the green beans were elevated to so much more than a humble vegetable side dish. Plus, the service was pretty darn dreamy by Amsterdam standards.

The bill arrived: including a tip, we’d spent €75 between the two of us. Add that to the €15 we’d already spent on pre-dinner beers, and that was a €90 night out. Turns out this budgeting malarkey is harder than we thought…

So two nights later, we tried again. This time at Indian restaurant Balraj on the Haarlemmerdijk. It had been on my to-eat list for ages, although it doesn’t look like much from the outside. The interior is typically kitsch, with Buddha and Krishna vying for attention among the trippy patterned wallpaper. But the food, thankfully, was worth the décor. This time, we toned down our starter-ordering impulses and shared just one portion of samosas, which were crunchy and spicy and dippable. 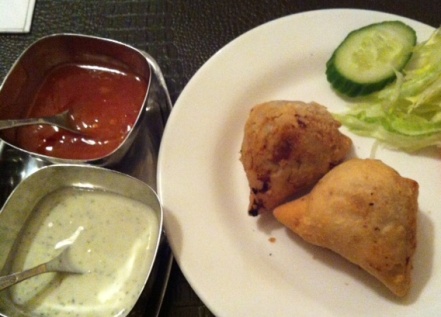 Next, we decided to try the Chicken Tikka Masala as the kind of Indian staple that we could easily compare with others: it compared favourably, and didn’t break the bank either. We also had the Alu Gobhee (or aloo gobi, as I’d usually spell it) – cauliflower is the new hipster vegetable, don’t you know? 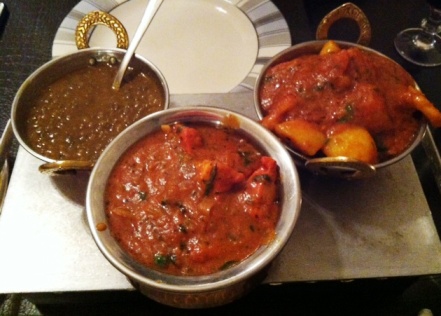 Reducing our wine consumption to a 50 cl carafe of the house wine instead of a whole bottle of something pricier, we got away with dinner for around €45 for two. It seemed we were slowly improving at budget dining…

Of course, what happened next was that we went to a wine tasting, got drunk and accidentally ordered a case of wines that clearly don’t fall into the budget category whatsoever. Ho-hum… practise makes perfect, eh?