Please note that since writing this blog post, Caffe Parma has closed down

Please note that since writing this blog post, Hugo's Bar & Kitchen has closed down

It’s always a dilemma in this game: visit a restaurant in its opening week so you can get the inside scoop first? Or wait six months to review it so the teething problems have worn off? Twice recently I opted for the first alternative – with drastically different results…

New on the Hugo de Grootplein, I was more than a little excited to see Hugo’s appear in my neighbourhood to replace whatever mysterious Moroccan joint always had its lights turned off in that space before. And jeetje, did they do a good job! Nothing like its predecessor, Hugo’s is cosy yet cool, with an open-plan kitchen and a bar stocked with all sorts of goodies to whip up a mean cocktail. (Try the “Hugo the Great” – about as great as it says on the tin!) 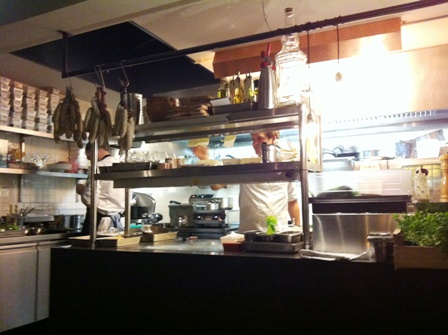 The menu is all very Ron Gastrobar (small, creative dishes that you pick two or three of) so we put the kitchen through its paces, ordering one of pretty much everything on the list. The cold courses came first: a raw scallop tartar featuring citrusy yuzu and crunchy apple, plus a crab salad with the bitter-sweetness of mandarin and beetroot. I lost track of all the hot dishes – but suffice to say they were all exquisitely prepared and presented. Don’t go expecting simple, home cooking, and I’d advise against sharing (we did, because we wanted to try everything, but it doesn’t really work with this type of food). Do go expecting to be wowed by a chef who’s undoubtedly been influenced by Ron Blaauw and Daalder’s Guillaume de Beer – and get there quick before the prices go up to match the chef’s aspirations.

In stark contrast, Marie Heinekenplein newbie Caffe Parma is a disaster pretending to be an Italian restaurant. The burrata reminded me of dishwater, not cream. The tiramisu was dry and uninviting, while the brandy snap it came with tasted like deep-fat fryer. The mysterious “Pasta di Parma” special left me none the wiser by the end of it: the dish involved our hapless waiter throwing a flaming pan of Jameson whiskey into the centre of a giant, hollowed-out parmesan cheese for no audience and no apparent reason. A mess of pre-dunked spaghetti and some kind of creamy meat sauce then joined the whiskey-cheese combo and ended up on my plate. What didn’t end up on my plate, however, was the ground black pepper – probably because the aforementioned waiter was so nervous he forgot to take the lid off before grinding it. He didn’t notice, and I was too embarrassed to point it out by this stage. And don’t get me started on the trying-too-hard decor or the mistakes on the bill…

Hugo de Grootplein 10 (Westerpark) / CLOSED
share this b a comments