Please note that since writing this blog post, Lt Cornelis has closed down

Please note that since writing this blog post, Reuring has closed down

This article is dedicated to AA Gill.

I think we can pretty much agree that 2016 was the epitome of a shitty year. Just as we were all starting to get over the sofa-sobbing, miserable stupidity of Brexit (or rather, just as I’d applied for Dutch citizenship), America got jealous and decided to steel back the Crown of Idiocy from the Brits and elect Donald Trump. In the midst of a refugee crisis, no less. And if all that wasn’t bad enough, our childhood heroes were being picked off one by one: if it wasn’t David Bowie it was Prince; and if it wasn’t Alan Rickman it was Muhammad Ali. But all these I could bear with the relative equanimity that generally comes with the death of people you don’t actually know. AA Gill’s restaurant reviews were to a great extent the inspiration behind why I went into food writing (or really, any writing) to begin with. And as a journalist, I’ll miss him far more than any musician or actor.

With all this being said, 2016 wasn’t so bad when it came to restaurants in the Dutch capital. (Phew, you’re thinking – I was wondering when this woman was going to cheer up…) The Foodhallen Amsterdam opened a bunch of new stalls from tacos to tempura; we all went bonkers for Breda and BBQ; I celebrated 10 years of Amsterdam food; and I published possibly my silliest post ever about weird restaurant toilet signs. (Sorry, but 2016 is one of those years that requires you to laugh in order to prevent yourself from crying.)

This year’s top 10 is based purely on my experiences of places I’ve eaten during 2016. Not all of these opened this year – some are new, while some are old favourites. The list is not ranked, nor is it exhaustive (there simply aren’t enough meals in the day for one person to eat at every new restaurant in Amsterdam!). Agree or disagree? Leave a comment!

This post has been created in collaboration with Eurostar – you can also read some of my restaurant recommendations on their City Break Amsterdam page. 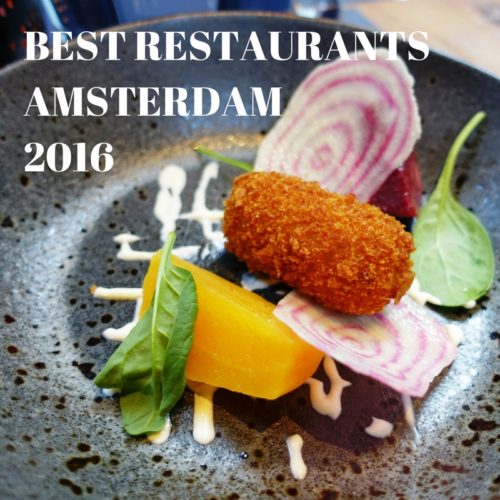 I discovered Breda on my fifth anniversary with the Honey Badger, which just so happened to be the day we announced our engagement. So my circumstances were not exactly unbiased, but I can honestly say my meal that night was one of the best I’d tasted in months – if not years. From the runner beans that took me straight back to childhood in my parents’ garden, to the horseradish and wild-garlic dressing that pepped up otherwise-ordinary greens, to the smoky grilled flavour of rib-eye and corn – everything I tasted was spectacular.

Read my full review of Breda

As a restaurant critic, I rarely tend to go back to places more than once or twice. I make an exception for A-fusion, which I’ve been regularly frequenting since 2008. An always bustling Asian fusion restaurant in Amsterdam’s Chinatown, I generally leave my dining choices in the hands of the kitchen and simply order the chef’s menu. Whatever they bring is a delight, but I’d recommend adding some steamed oysters and truffle-beef sushi – because you’re worth it.

Read my full review of A-fusion

Lt. Cornelis, a newcomer in 2016, might be located right off the Spui in the heart of tourist-Centrum. And yes, it may have slightly cheesy reproductions of Rembrandts and Vermeers on the walls. But don’t let that put you off trying some of the best, most authentic Dutch food in town. Standout highlights when I visited included the barley risotto with Jerusalem artichokes, BBQ-ed leeks and messenklever cheese; continuing the smoky theme was BBQ-ed spitskool (cabbage) with crispy-skinned cod and parsnip. Dutch food never looked (or tasted) so cool.

Newly opened in 2016, Kaagman & Kortekaas is somewhere I’d happily bring work colleagues for a leaving do, a group of friends for a dinner splurge, or really anyone I wanted to impress with food without the atmosphere being either pretentious or overly romantic. The food is creative and modern, using plenty of local game and seasonal ingredients. Oysters are always on the menu, but the night I dined there the rabbit was a hit at my table!

5. Best BBQ outside the USA: Pendergast

I’m saying Pendergast is the best BBQ joint outside of the US, but truthfully I’ve had very few BBQ experiences this good anywhere – with the possible exceptions of Memphis, Tennessee and Lockhart, Texas. In any case, Pendergast certainly serves the best ribs in Amsterdam, and possibly the only brisket worth eating in the city. Well, other than my own, of course 😉 All the way from Kansas City, the folks at Pendergast know their way around a smoker. And a liquor bar, for that matter. So get your julep on and enjoy the meat-fest.

Read my full review of Pendergast

I’ve called this category “best tapas”, but that’s perhaps a little misleading. Brought to us by the people who ran Hugo’s (sadly now closed), Pikoteo specialises in a sort of modern, fusion tapas the like of which I’ve not seen before in Amsterdam. And though I don’t love everything on their menu, I appreciate the fact that they’re trying something new. The smoked beef carpaccio with truffle and shaved Idiazabal cheese was my favourite dish when I visited: bold but delicate, pungent but refined, all at the same time. Plus, they have a good wine and cocktail menu.

Read my full review of Pikoteo

If you like to eat with the seasons and aren’t a picky eater, you’ll love Reuring’s well-priced set menus. The evening I dined there was in autumn, and we gorged on seasonal game – partridge and wild duck – with truffles, pumpkin and kale. The service is excellent, too. A good safe bet for any occasion.

Read my full review of Reuring

I’d been to Little Collins for brunch many times before (it’s still one of my favourite brunch spots in Amsterdam), but it wasn’t until this year that I first tried it for dinner. The menu encourages you to share “small” plates – but honestly these plates are huge. Which makes dining out at Little Collins pretty good value, too. The international menu offers everything from North African-inspired cauliflower with freekeh to Asian-inspired sticky pork belly. So order one of Little Collins’ signature Bellinis to kick off and settle in for the evening…

Winter has come around again as I write this, and one of the few solaces of knowing I’m going to be wearing a coat for the next five months is the thought of this Utrechtsestraat bistrot’s Alpine comfort food that transports you straight to Switzerland. Think raclette, fondue, tartiflette, charcuterie, and as many calories as you can shake a ski pole at. Don’t forget to take a selfie in the ski lift that’s sitting in the middle of the restaurant!

While researching places to eat with kids (for an article – don’t worry, I’m not up the duff), I accidentally stumbled upon an excellent brunch spot. Dignita might sound like a charity for euthanasia, but in fact it’s a split-level café just off the far end of the Vondelpark. Their eggs are poached to perfection, their coffees are beautifully brewed, and their appeltaart is heavenly spiced. Try Dignita’s courgette and chickpea fritters for a great vegetarian brunch option.

Read my full review of Dignita

Lutmastraat 99 (De Pijp) / CLOSED
share this b a comments