Those of you who’ve been reading this blog for a while will know that last summer I was engaged in an important mission: The Search for the Perfect Taco. I tried Burrito Maker, Caramba and the Original California Burrito Company with varying degrees of success (and, in general, found better burritos than I did tacos). I’d more or less given up my search when, out of the blue, two young men appeared on my doorstep with a bottle of tequila. 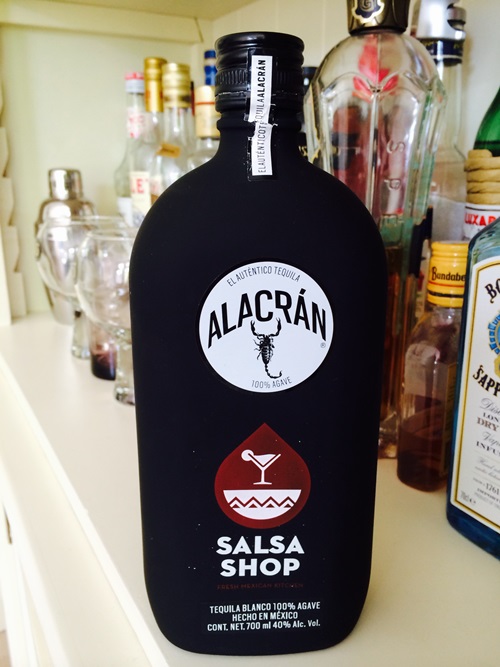 Talk about knowing your audience. Call it an innocent gift, call it bribery, call it what you will – they had me curious. The tequila bottle came attached to an invitation to the launch of Salsa Shop in July, which I attempted to attend until I remembered that I am horrible at launch parties (especially when they involve crowds of tall people in 30-degree heat). So I told the guys that I would come back some other time, unannounced, incognito, and definitely as a paying customer. 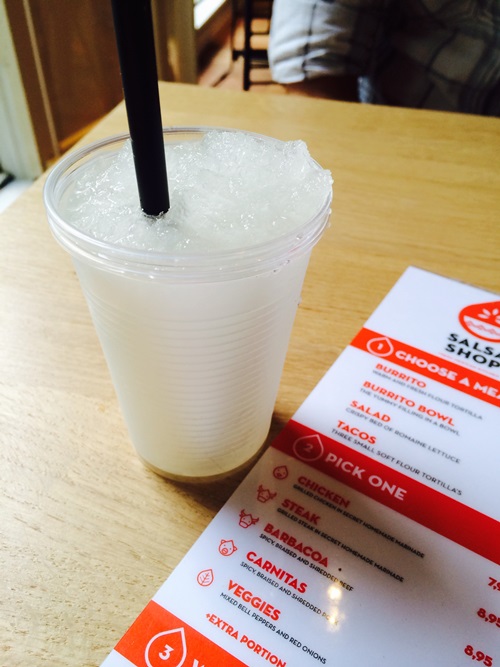 Last Sunday, hungover from a wedding the day before, was that time. And boy, did my hangover need it. I ordered a hair-of-the-dog margarita, but it tasted like a slush puppy to me. No matter. I have my own bottle of Alacrán tequila at home, and I can make my margaritas just as strong and sour as I like them in the comfort of my own kitchen.

Salsa Shop has set up a sort of salad bar for taco fillings: you select your main ingredient (chicken, steak, carnitas (a wetter version of pulled pork), barbacoa (the same idea but beef) or grilled veggies), which come on top of fresh soft tortillas. You’re supposed to get three, but they were serving four apiece the day we were there because apparently they were smaller than normal. Bonus, as it meant I got to try all four meat fillings! Next, you can choose to include pico di gallo, cheese, sour cream, guacamole or corn. Me being me, I asked for everything, which was a bad idea because a) this meant it was totally impossible to close the taco shell and actually get the thing in my mouth, and b) it made some of the taco shells a bit wet and sloppy from too many toppings. But I doubt I will learn my lesson any time soon… 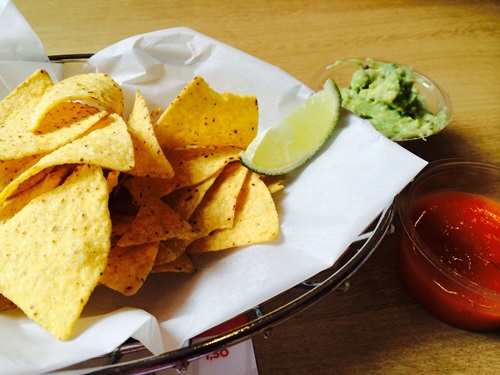 And finally the best bit: the salsa! My favourites were the smoky pineapple chipotle salsa and the peach habanero salsa. But beware: both are pretty hot, so if you can’t stand the chilli, stay away from the fiery yellow habanero version! Even the Texan/Louisianian Honey Badger was cooling his tongue off in the margarita slush after that one… (But we did order extra chips, just so we could indulge in more of the peach habanero paired with a portion of cooling guacamole.)

While there’s plenty of space to sit in Salsa Shop, it’s definitely fast food – but only in the good sense. You may have to queue, but it moves quickly and if you’re lucky you’ll get “waiting chips” to snack on while you stand in line. Crockery and cutlery don’t really happen (and aren’t really needed) and prices are low: currently around €8-9 for three tacos or a burrito. So did I find the perfect taco? I certainly found the best taco I’ve ever eaten in Amsterdam. And next time I’m at Salsa Shop, I’ll know exactly what to order to make it as damn near perfection as possible…