Perhaps because it was stuck under British rule for a long time, or perhaps because a tiny island is going to struggle to keep up with global gastronomy trends, but it wasn’t easy to find good food in Malta. I’d taken advice from a local and from visitors who had been before me, but when I strayed into simple “this has got good reviews on TripAdvisor and Google” territory I was quickly disappointed. Still, that doesn’t mean there aren’t good restaurants in Malta to be found if you know where to look. Plus, all that sun means that the produce the island is able to grow is pretty good, and it doesn’t seem to hurt the Maltese wine industry either…

This isn’t going to be my most extensive foodie guide, but if you’re heading to the main island for a long weekend it should at least give you a starting point for sampling the bars and restaurants in Malta. On your travels and want to use this article offline with GPS-guided navigation? Download the travel guide app via GPSmyCity! 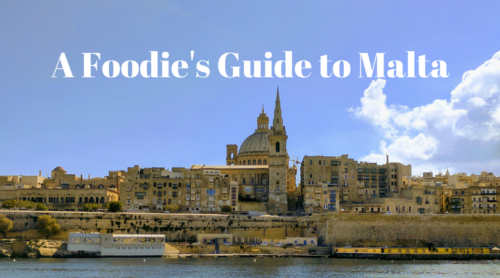 (Side note: I caught a cold halfway through my trip, so my sense of smell and taste wasn’t up to its usual standards. However, Mr Foodie was with me – and healthy – and he concurs with all of the below…)

5 Restaurants in Malta that are worth a visit

One of my favourite discoveries of the trip was the wonderful pastizzi. Think savoury, butter, flaky pastry, stuffed with a filling of either ricotta, chicken (imagine a chicken pie filling) or mushy peas. The shape of them looks – well, like a vagina. Which may make them more or less appealing, depending on how you feel about vaginas, I suppose. I tried the ricotta version for breakfast from Jeff’s Pastizzeria, which is technically in Gzira but is extremely easy to get to from Sliema and St Julian’s as well. (And, in fact, Facebook suggests Jeff might have another outlet in Hamrun – we went to the bakery on Triq d’Argens.)

Two days later, I tried the chicken pastizzi at Maxim’s Pastizzeria in St Julian’s, which wasn’t nearly as good. Mr Foodie had the chicken version at Jeff’s and reported it to be far superior. Ok, so I only tried two pastizzerias in the whole of Malta, but Jeff’s seemed pretty darn delicious to me. (Tip from a local Maltese friend: any of the hole-in-the-wall places are generally a safe bet; just avoid ordering the pastizzi at a regular café or restaurant as they’re likely not to be fresh and therefore soggy and greasy – not what you’re looking for!)

We didn’t get to spend as much time in the beautiful, historical city of Valetta as we’d have liked to. Despite its picturesque cobbled streets and ancient architecture that were obviously a tourist draw, it didn’t feel quite as crowded as elsewhere on the island, and also seemed more cosmopolitan. Or it may have been that our night out in Valetta had us eating easily the best food of the trip. Legligin, which was recommended to us by both a local foodie and an American friend who had been twice before, offers a daily changing menu of six-nine courses for just €27.50 per person. It’s generally a combination of Maltese and broader Mediterranean dishes, served in small shareable portions. The restaurant itself is also very atmospheric (with a sort of underground cave vibe), the wine excellent, and the service jovial.

The night we were there, we tried everything from local mussels, octopus and snails, to Sicilian caponata and olives, to quail salad and North African lamb stew with couscous, not to mention the ubiquitous rabbit. There’s not much point my going into huge detail about each of our eight courses because by the time you visit they will be completely different. Suffice to say that everything is market fresh and zinging with local flavour. Legligin is absolutely unmissable. For more information, check out Facebook (not an official page but there’s at least an email address and phone number for making reservations).

Warning: if you are a too-cool-for-school hipster, you’re not going to like my next recommendation because it is cheesier than a block of Gouda. If, however, you’re prepared to embrace the fact that you’re a tourist, Ta’ Marija is a lot of fun. The restaurant is in Mosta, which is about 30 minutes by car from Valetta; but fear not – if you book one of their Friday folklore evenings, they’ll send a mini-bus to your hotel to pick you up and drop you off (meaning you can take full advantage of the all-inclusive wine). Once there, prepare to be entertained (and, at times, chastised) by Marija herself who is your host for the evening. Try the Maltese aperitif (cactus liqueur and Kinnie – a Maltese soda) and the selection of Maltese starters, which are all good except for the bland bean paste and the too-salty cheese.

The ravioli stuffed with ricotta and served with tomato sauce are fresh and tasty, as is the rabbit stew (I was less impressed by the fish and beef dishes). Oh, and a couple of locals strumming a mandolin and a guitar are there to serenade you while you eat. Once sated with enough food and wine, it’s time for the dancing: Maltese women in traditional garb perform dances designed to transport you back to the time of courtiers and corsets. If you’re lucky, you might even be picked to join them onstage for the last dance. Like I said, it’s mega-cheesy but lots of fun. For more information, visit Ta’ Marija’s website and take a look at their Folklore Dinner Shows.

For obvious reasons, Italian food is quite prevalent in Malta – but you’ll still come across plenty of low-grade fast-food pizza joints catering to the thousands of tourists. Luckily, if you find yourself walking along waterfront (otherwise known as The Strand) between Sliema and Gzira, you’ll also find the oddly named hiMú. Specialising in mozzarella imported from the Campana region of Italy, hiMú bakes a mean Neapolitan-style pizza – complete with very fresh buffalo mozzarella, of course. Definitely several cuts above the Pizza Hut-style places that dominate the tourist areas. For more information, visit hiMú’s website.

When the weather is endlessly sunny, it’s understandable that visitors from more northerly climes would be keen to eat outside. And yet many restaurants in Malta are entirely indoors, almost cave-like, presumably to shelter from the midsummer heat. One exception in Valetta is Rampila, where you walk through what feels like a stone grotto to reach a spacious outdoor terrace overlooking the ancient city walls. It certainly feels more luxurious than the pavement terraces we came across, and still has an expansive canopy for shade. I should note, however, that we were in Malta in October when the weather was a very pleasant 19-24 degrees C; in the height of summer, I imagine that the indoor dining would be a welcome retreat.

At Rampila, I ate one of the daily specials: a local fish called “brown meagre”, which came with a tomato and parsley salsa and various vegetables. It was fresh and simple, but nothing really to write home about, although I loved the local Victoria Heights Chardonnay produced in Gozo’s vineyards (more on Maltese wine below). And really, you’re there for the terrace and the view as much as the food. For more information, visit Rampila’s website.

Maltese wine shouldn’t have been a surprise to me, but it was. At times, Malta feels like a scorched chunk of rock in the middle of the Med, which doesn’t sound too hospitable for growing grapes, especially white wine grapes. Fortunately, I was wrong – the Maltese island of Gozo produces some excellent reds and whites, and I didn’t drink a bad glass of wine during my entire trip. We tried the Victoria Heights Chardonnay that I mentioned earlier, as well as the Marsamena red blend from Ta’ Mena and the Caravaggio Shiraz. Better still, a bottle of Maltese wine in a restaurant only costs around €14-16 (I’m not sure how much it would cost from a store) – the equivalent quality in Amsterdam would probably set you back at least €28. So you can drink twice as much!

Or more like Happy Day: many of the bars in the tourist areas offer 2-for-1 cocktails every day until around 7 pm. Ok, so they’re not about to win any Mixologist of the Year contests, but when you’re on holiday you can’t say fairer than €6 for a couple of frozen daiquiris. If you’re in St. Julian’s around sunset, try the seaside terrace at Café Cuba in Spinola Bay – their cocktails are fiendishly strong and the Happy Hour lasts from 4-6.30 pm. More info about their three Malta locations on Cuba’s website.

Cisk is an award-winning local brew that has outdone even its Czech rivals in the Czech-style pale lager category. Cisk beer also comes in other versions, including the low-carb “Excel” and the full-bodied “Strong”. If I’m honest, I prefer the Dutch and Belgian-style beers, but lager lovers will not be disappointed.

Again, the Italian influence comes into play when we’re talking coffee. Go to any old café or hotel bar and the coffee has every probability of being terrible. Go to somewhere with a vaguely Italian-sounding name which is (crucially) being run by Italians, and the cappuccino will take you right back to Rome.

I really liked Café Ole in St Julian’s – set back just behind the waterfront, it’s a tiny, buzzing little place full of Italians waving their arms around. Also good was Bella Sicilia on The Strand between Sliema and Gzira. They don’t have websites, but search for them by name on Google Maps and you should be able to find them.

A Food & Wine Tour of West Germany: Wiesbaden to Aachen in 48 Hours

A Foodie’s Guide to Vilnius, Lithuania