A few weeks ago (on my birthday, as it happened), I went out for lunch to meet with a potential new tour guide for my other venture, Eating Amsterdam Food Tours. We’d been planning to head to my favourite toko in Chinatown, Dun Yong, for some ramen from noodle lunch-spot Le Fou Fow. Only it was closed – or at least it wasn’t open nearly early enough for us pseudo-Dutchies who were starving at 12 noon on the dot…

So instead, we wandered down the Zeedijk until we chanced upon what was to become a rather spectacular Plan B: Little Saigon. It’s not much more than a hole-in-the-wall, with some incredibly smiley Vietnamese staff working their culinary magic in a tiny kitchen. Although we’d been planning on noodle soup originally, the prospect of pho didn’t seem quite so appealing given the hot weather that day, so we opted for a couple of cold bites to share instead. 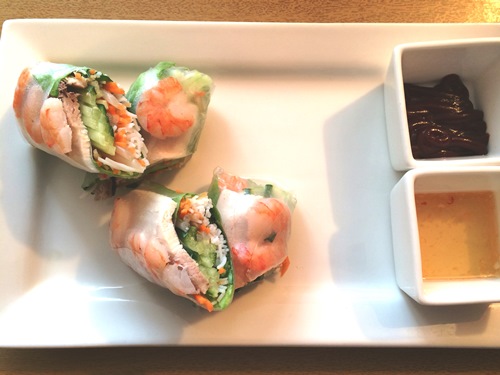 The spring rolls were packed full of fresh goodness, and came with two contrasting and equally tasty dipping sauces. The rice pancakes that wrapped them were the perfect texture, as well: not too firm, not too soft. 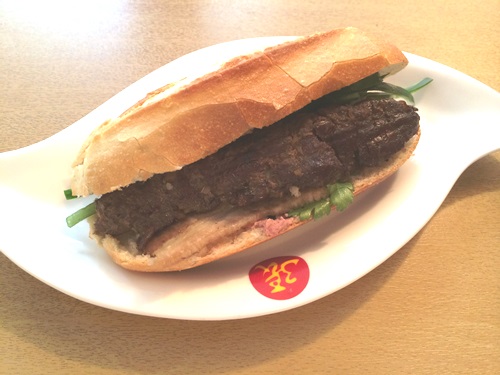 Vietnam has a curious addiction to French baguettes (curious because not a lot of wheat is eaten in Asia, not because I can’t see the merits in eating baguettes!) due to the two countries’ previous colonial relationship with each other… And nowhere does Vietnam elevate the humble baguette to higher echelons of sandwich society than in its wonderful banh mi. Our French bread came with the “all toppings” option (it was my birthday, after all), which seemed to include beef, chicken and something liver-related in the meat department, plus pickled cucumber and coriander in the veg department.

The sandwiches were a mind-bogglingly cheap €3.50, while the spring rolls were around €6. We left feeling pleasantly satisfied, rather than uncomfortably full, and our wallets weren’t complaining either. Vietnamese food has yet to really take off in Amsterdam. But for these prices, you’d better get to Little Saigon quick before it does!