Ever since spending Christmas in Texas, the Honey Badger and I have been on a rather fruitless quest to find decent, cheap tacos in Amsterdam. Our first fateful mission (to Tio Pepe) was a complete disaster (albeit an amusing one), and while I like the margaritas at Los Pilones, the tacos aren’t really cutting it.

Then lately, I’ve received a few recommendations plus news of recent openings on the Mexican scene – so I decided to check them out and share the results with you here. While I’d intended to visit a few and then give you a “Top Three”-type article, time hasn’t allowed me to do a fraction of the research that I’d intended to – and by the time I’ve done more, lots of places will be old news. So, in the interests of immediacy, let’s assume this is a series of posts… to be continued…

On the corner of the Haarlemmerplein (which I’ve decided is going to be my new hot tip for terraces pretty soon – it’s being renovated right now and I predict it will turn into one big pavement café), the Burrito Maker opened in spring by an American guy who (also) couldn’t find a decent burrito in Amsterdam. Now, I realise a burrito is not the same as a taco, but a) Burrito Maker serves both, and b) the idea is the same – simple, tasty, affordable Mexican food that you can eat with your hands. (Sort of – unless you’re me and then you end up with it all over your face, shirt, jeans, big toe…) 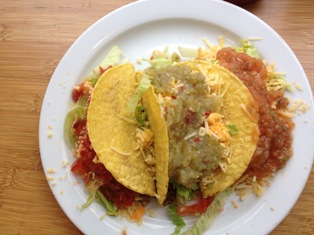 The tacos come in threes, which is handy because there are three fillings (chicken, minced beef and veges), as well as three different sauces (pico di gallo, salsa verde and habanero salsa) of varying chilli-heat to try. All of the above come with cheese (which was pre-grated but more than decent in quality) and salad, with sour cream and guacamole on the side as extras. Despite being impossible to eat without getting in a huge mess (but the Honey Badger tells me I have a special talent when it comes to covering myself in food), the tacos were delicious. 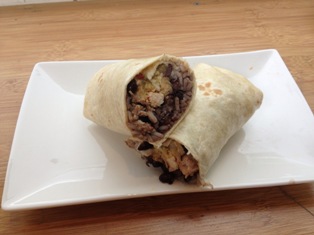 The burritos came a close second – we tried the beef burrito with black beans, rice and cheese, which was characteristically filling and pleasantly citrusy. The only downside was that the minced beef was cold, not freshly cooked to order, and then re-heated in the already-assembled burrito.

All in all, however, a great addition to the Haarlemmerplein, and a great start to my tacos series!