You know The Polaroid Man, right? The guy (who is in fact probably several guys) who pops up every Saturday night in Amsterdam (in fact probably in lots of cities) offering to take your photo for money… rather like Father Christmas, only generally for drunk adults rather than for kids. Well, at Blauw, the waiter is The Polaroid Man; but he has a regular digital camera and he doesn’t ask you for money and you can pick up your photo from the Blauw website the next day – genius! So here it is: 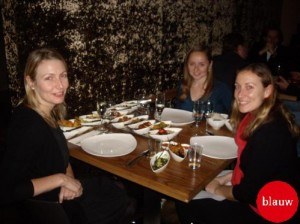 Anyway, the reason I was at Blauw is that I am reviewing it for Time Out Amsterdam’s guidebook, and I expect it’ll appear in the magazine at some point too. This means I’ve just spent the morning writing about it and therefore don’t have an awful lot to say. So I’ll show you some photos of our rijsttafel dishes, all of which were rather good actually.

There were a few bum notes – like the not-so-fresh monk fish in chilli jam, and the bean sprouts and tofu in a sauce so sweet it’d send you running for the dentist. But mostly it was great – juicy chicken and beef skewers with sate and molasses sauces respectively; sweet ‘n hot n’ vinegary vegetable salads, various coconut-based dishes like beef rendang and battered fish with lemongrass; and a mango sorbet that left me wanting more despite having just ploughed my way through a veritable flotilla of about 20 (I kid you not) boat-shaped dishes.

The interior was nice too – all split levels, warm reds and fuzzy textures… dateable, if I were having any dates these days, which I’m not.

Oh, and I learnt how to use my camera! Well, my friend pointed out the exposure button, which of course I’d never used in the two years I’ve owned the damn thing. And this means that I can take some of the glare off a white plate when I’m using the flash (which is a very good thing in a restaurant that gives you individual spotlights by which to read your menu) or increase the exposure when I’m not using the flash. I haven’t had much chance to experiment yet, and don’t get your hopes up because I am still a hopeless photographer, but I’m learning…