I’d heard Cape Town was food lover’s paradise, but beyond the vague sense that it was going to be pretty bloody awesome, I didn’t have many expectations. After all, my whole plan had been to go to Bali up until about a month before booking the trip, at which point I suddenly did a complete about-turn because someone told me the wine there was rubbish and I should probably go to South Africa. I was sold. Cape Town came at the end of my trip (more about the Garden Route and Winelands in another post another time) and was quite honestly a grand foodie finale. By the time I arrived, I’d got far more restaurant tips from friends, followers and fellow bloggers than I could possibly stomach – so this is but a very scant selection of the full bounty Cape Town has to offer. 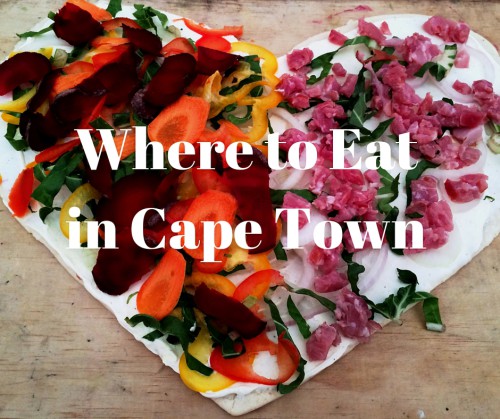 Do 10 seconds of research about where to eat in Cape Town and you’ll undoubtedly come across Chefs Warehouse. On the plus side, they don’t take reservations (which is an advantage in a country where every restaurant seems to get booked up weeks before you’ve even started thinking about booking your flights, let alone anything else). On the minus side, they close at 8 pm, which is too early in a holiday situation when you’re trying to fit in Table Mountain, Robben Island and several food markets before the sun goes down.

So instead, we scoured Bree Street (according to Eat Out, the coolest restaurant strip in Cape Town) and came across Peruvian restaurant Charango. The menu looked good, so we booked a table for the following evening, forgetting that it was of course Valentine’s Day. The South Africans seem to take V-Day very seriously (we heard nothing but romantic drivel on the radio for two weeks solid) so we should have guessed we’d be subjected to a “special” Valentine’s Day Menu. This was a shame as I’d have preferred to sample a few things off the regular menu, but there was no getting around it. Fortunately, the tuna tataki and churrasco steak were very good, but if anyone’s tried Charango’s ceviche I’d love to hear from you.

A day or two later, we explored Bo-Kaap – the colourful Cape Malay area just north of the centre on the slopes of Signal Hill. There, we made a beeline for Biesmiellah, where we tried traditional Cape Malay dishes like bredie and denningvleis – both sweet and spicy stewed lamb dishes mopped up with roti and rice.

Unsurprisingly, Cape Town is dominated by the sea on one side and by the huge Table Mountain national park on the other. So the city has made the most of its harbour location with the creation of V&A Waterfront – a vast complex of restaurants, malls and tourists. I wouldn’t recommend staying there, but you’ll inevitably end up there at some point after a boat trip or an excursion to Robben Island. And when you do, it’s worth walking over to the V&A Food Market – the equivalent of Amsterdam’s Foodhallen. We tried a few different food stalls while we were there, our favourite being Kubu – describing itself as modern African cuisine. We tried ostrich, crocodile, zebra and warthog all skewered onto a kebab, served with a sweet and sour bean salad.

One place we didn’t get time to visit but that I’d heard great things about was Willoughby & Co – a no-reservations sushi joint in a shopping mall. Sounds dodgy but is apparently brilliant (let me know if you’ve been).

We were staying in Vredehoek, which is one of the neighbourhoods in the so-called City Bowl – presumably due to its topography in the lee of Table Mountain. Apart from all the hills you have to climb up and down to get anywhere, it’s a great place to base yourself and has a real local vibe to it. We also discovered perhaps our favourite restaurant in Cape Town here: the Woodlands Eatery. From “gourmet” pizzas to kick-ass tacos, we enjoyed everything we ate. Italian purists should leave their preconceptions at the door, however, as pizzas here come with Turkish pulled lamb and crème fraiche, or with bacon, avocado and gorgonzola.

For breakfast, we enjoyed the Sidewalk Café – a cheery little spot serving eggs benedict on potato rosti (the Capetonians are not afraid of fusion, as you can tell), healthy granola-style bowls, and their “cheap breakfast” comprising an egg, a slice of toast, half a tomato and a couple of slices of bacon for just 35 ZAR (around €2 at today’s crazy exchange rate). I’ve heard their evening menu is good too, but we didn’t get time to try it out.

Possibly the highlight of my entire stay in Cape Town was the Saturday-morning Neighbourgoods Market at the Old Biscuit Mill in hipster-hood Woodstock. I’m assuming it’s no coincidence that its name closely resembles that of the NeighbourFood Market in Amsterdam’s Westerpark, but I’m guessing the Cape Town version came first. It is bigger, better and friendlier, with two huge halls full of food purveyors plus more outside the front. We tried everything from Ottolenghi-style salads to tuna sashimi to smoky grilled meats cooked on the braai (BBQ). Get there early (we arrived soon after 9 am and it was already filling up fast) and stay for an extended walking brunch. I happily passed 3 hours in what felt like the blink of an eye.

If you need a respite from all the food, browse around the shops at the Old Biscuit Mill for sustainable souvenirs, hipster fashion and cool gadgets. For dinner, I’ve heard the Pot Luck Club is pretty amazing too (needless to say, I couldn’t get a reservation).

Camps Bay is a seaside suburb on the other side of the mountain from the city proper. I can’t tell you much more about it, as I only drove through it once to get to The Codfather – a fish restaurant recommended to me by an old friend whose parents come from South African originally. It’s not much to look at from the outside – a blue neon sign illuminates the salt-worn paintwork of the building, reminding me of Blackpool in the 1980s. But once inside it’s a different story. There’s one of those sushi conveyor belt things (which kids seem to love – my friend’s two kids were mesmerised for all of about 10 minutes, which is a lifetime in toddler terms) and there’s no menu for the rest of the seafood. You simply tell the waiter what you want from the fish counter; he calculates the weight based on the number of people in your party. Job done. To start, we ordered a heap of calamari, langoustine and lobster to share, followed up by a main course platter of kingclip (a South African speciality), swordfish, cod and a local fish whose name I’ve forgotten. All were super-fresh and came served with rice, veges and a range of sauces. My only complaint was that the scalding hot platter meant the fish near the bottom of the dish were rather dry and overcooked by the time we got to them. But when it’s almost impossible to spend more than €50 for two, it’s not worth complaining about!

As I said at the beginning, I barely scratched the surface when it comes to Cape Town dining, but I hope this gives you a taste and perhaps a starting point. Thank you to all the friends, readers and followers who gave me restaurant recommendations before my trip, and especially to bloggers Miss Moss and Food and the Fabulous (the latter being Cape Town’s FoodieHub expert) and to Eat Out website, all of which were excellent resources for the traveling foodie.

For more information on the restaurants and markets mentioned:

A Foodie’s Guide to Porto: 12 Must-Try Dishes and Drinks

A Foodie’s Guide to Stockholm (+2 Islands!)