Please note that since writing this blog post, Smokin Barrels has closed down

As you may have noticed, I’ve been making a bit of a push to explore Amsterdam Oost recently. I made it as far as East 57 and The Gastro.bar, wrote up my reviews, and concluded that they weren’t worth the bike ride… surely I was missing something?

Turns out I was: the Beukenplein. Around a year ago I had dinner at Bidou and liked it a lot. But it was a dark winter’s evening and I don’t remember an awful lot else being around there, if I’m honest. Those who live in the area can probably tell me whether I was just being unobservant, or whether the sudden glut of cool bars and restaurants has sprung up in the past year. Either way, what with French comfort food (and pizza?!) from Bidou, drinks at Maxwell, and surf ‘n turf-meets-cocktails at Smokin Barrels, the Beukenplein is quickly becoming the new Noordermarkt. 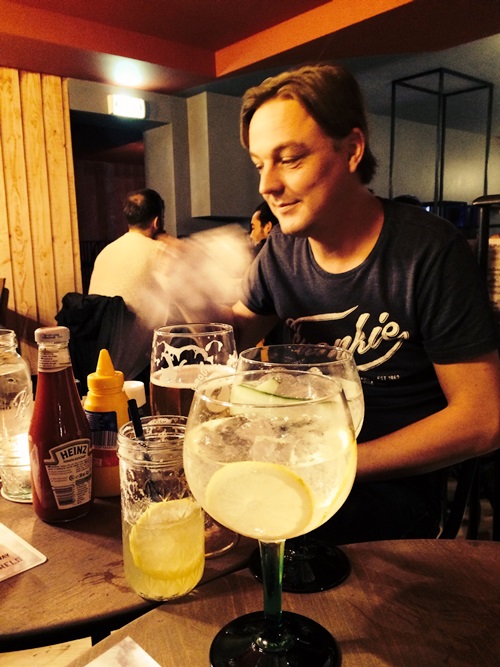 I happened to be there on only its second night open, so I was expecting a few teething problems. Many new restaurants and bars in Amsterdam fall victim to their own instant popularity, leaving you waiting an-hour-and-a-half for a beer and a burger. Not so at Smokin Barrels – and this despite the fact that we were sitting on a mezzanine level, right at the back (the place was packed from the get-go) – surely prime real estate for the Dutch art of ignoring customers? Apparently not. Our waitress was a gem – a smiling, glass-carrying, order-taking, efficiency-mongering angel of customer service.

This has the potential to sound at odds with what I just said, but at one point she knocked half a beer over on our table by accident. I’ve had this happen to me before in other places, and while I’ve cast my gaze around frantically for the nearest napkin, I’ve listened to the waiting staff sigh in annoyance, reach for a cloth for the floor, completely ignore me and my sodden jeans, and wander sulkily away to return to their chat behind the bar with their colleagues. What a contrast from Ms Smokin Barrels, who said sorry half a dozen times, brought us a new beer in an instant, and offered me a dry tea towel – all the while smiling apologetically and chatting to us like we were the only customers she had to deal with that night. The Honey Badger was so impressed he left an American-style 20% tip. Well I never: good service being rewarded by a happy customer? Who’d have thought such a crazy principle existed… 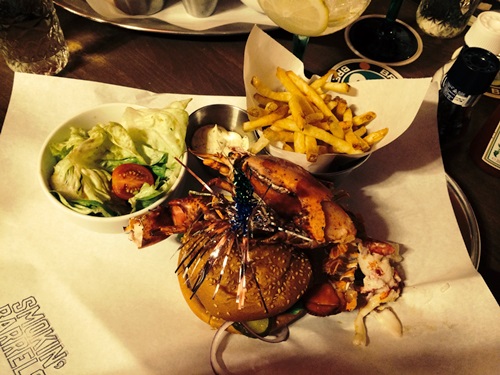 Good grief – I’ve just written three paragraphs about the service and barely mentioned the food. So let’s just be clear: I loved the food too. I ordered the surf ‘n turf: €23.50 for half a lobster, plus a decent sized burger (cooked perfectly pink in the middle) in a brioche bun with all the toppings. Perfect pub food.

I also tried the Arie Gold – a burger combo that involved foie gras, madeira and truffle. The bread that it was sandwiched in didn’t quite work as a burger-holding device, but the flavours were undeniably luxurious and sublime. I also went a little overboard on the gin & tonics, of which there were several delicious varieties – they all came in those fishbowl-sized glasses that seem to extend summer by at least the hour that it takes you to drink them.

So, there we have it: finally a reason to return to Amsterdam Oost… Thank you, Smokin Barrels, for restoring my faith in customer service – see you next weekend?