Sometimes people tell me that they’re intimidated by the idea of going to posh restaurants – that the more expensive a place is, the more likely they are to embarrass themselves. I think I might make it a personal side project to prove that even when you review restaurants for a living, it’s still possible to make a complete tit of yourself. And what’s more, it doesn’t really matter.

A couple of months ago, I wrote a post about how I accidentally tried to walk out of Madelief without paying, and another about how I sat for several minutes by myself in Brasserie Bark while the rest of my friends were in fact at a table right behind me. The other night, on arrival at the Andaz Hotel – home to the Bluespoon restaurant – I remarked as I walked up to what I thought was the reception desk that it seemed awfully high. Still, we’re in Holland, I thought, people are tall! But no, it wasn’t the reception desk – it was two people sitting in a booth trying peacefully to eat their dinner, wondering why muppets like me were asking about table reservations.

Anyway, crashing on, I ordered a refreshing “Spring Garden” long-drink cocktail – only to spill half of it all over myself (the tragic waste of good alcohol!) and send the barman running over with a tea towel. And this was made even more embarrassing by the fact that the Bluespoon had actually invited me to dine there – people knew who I was. And now they knew that I was a complete clutz. 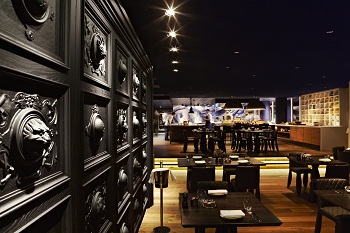 Still, they were gracious enough to ignore my utter ineptitude, while I struggled bravely to regain the composure that grown-up restaurant critics are undoubtedly supposed to exhibit. I hid gratefully behind the menu for the next ten minutes. Luckily, the menu was quite interesting: first of all you got to find out where the main ingredient in each dish came from (asparagus from Maastricht, crab from the North Sea, and so on); then you got to figure out that starters and mains were all offered in small and large portions (which surely somewhat defeats the object of listing them as starters and mains in the first place?) with prices to match.

I ordered two small dishes: red mullet to start and scallops to follow. The mullet was cute because it came with a little jar of delicious things: ratatouille, potatoes, olives; it was also served with a couple of slices of pickled carrot and some very delicious homemade aioli. The scallops were – umm – small but perfectly formed. The various squashes were delicious, as was the delicately creamy foam, but only two scallops for €22? That’s either over-priced or under-scalloped in my book. We ordered side dishes at another €5 each – the watercress mash was a brilliant green, buttery stamppot, but the fries were the skinny variety that remind me of Maccy D’s – never a good association. 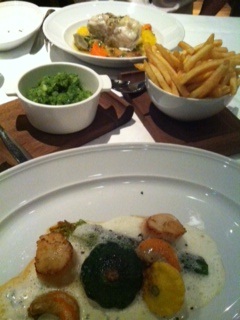 Dessert was an accomplished pineapple crème brûlée with a silky passion fruit sauce – exotic and sexy. But I’d expect that from accolade-laden Swiss chef Julien Piguet. In fact, I’d expect a lot for €170 for two people, especially when bottles of wine start at around €45. I liked Bluespoon in many ways, but I’m not sure my dinner was entirely worth the price tag.

Still, for a canal-side location in a five-star hotel (designed and furnished by Marcel Wanders himself), an evening in the Bluespoon restaurant and bar may be just the right note of indulgence and exclusivity you’re after. It may have been no coincidence, however, that the people at the table next to us were German – they’re probably the only Europeans who can afford it right now.

Where to eat… dosa in Amsterdam