Back in the 80s, people used the word ‘trendy’ to describe things that were fashionable. Clothes, food, venues. Trendy is now about the un-trendiest word you could apply to anything, but – weirdly – the word ‘trending’ seems not to have suffered the same fate. Was it Twitter and its annoying little hash tags that started it? I’m not sure, but suddenly everything is trending…

And the thing about Amsterdam is that most trends seem to happen a year of two later than they do in London or Berlin or Chicago, which means that all you have to do is jump on an international bandwagon and ta-daa! You’re at the forefront of Amsterdam grooviness.

In the last 48 hours, I’ve been out for a spectacular brunch, I’ve eaten pop-up Korean food in a freezing cold, not-quite-converted-enough warehouse, and I’ve bought bread in a flower pot from a food truck in a park. My hip bones are aching so much right now I might need a cup of tea and the Eastenders omnibus just to give them a rest.

Let’s start with the brunch, as it’s the only bit of gastro-cool on the list that has a fixed address and phone number that I can usefully put in my (clearly antiquated) database. Little Collins is run by two Australians who clearly know how to cook. Always a good start. It’s on a quiet street in de Pijp, which is a shame because it’s miles from my house but probably close to where all you hipsters are living. But I should quit with my cool-bashing, because there’s nothing remotely try-hard or pretentious about Little Collins. The venue is simple but cosy, the coffee hot and strong, the juices freshly squeezed, and the service friendly but not invasive. What’s not to like? 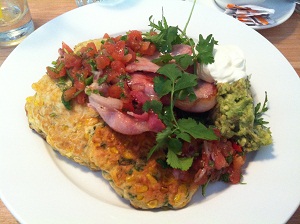 The menu features brunch classics (full-on fry-ups, kedgeree, granola, that sort of thing) alongside various less obvious choices. I had corn and coriander fritters with bacon, guacamole, salsa and sour cream. It looked enormous, but I couldn’t stop until I’d polished off the whole plate. I then ordered a second small-but-perfectly-formed cappuccino to wash it down. I’m not sure I can wait till next weekend to go back.

Rather more difficult to blog about are the pop-ups. Not least because by the time you read this, most of them won’t exist – or not in the form or context in which I’m writing about them. Pop-ups have existed in Amsterdam for a little longer than it might seem: I started my own underground dining concept by the name of Hidden Kitchen back in 2009. Meanwhile, Jason Hartley’s lovefood has found homes in Cafe Finch, Cafe Bax, Brasserie Vlaming and elsewhere over the three years he’s been in business, and he’s currently in the process of launching a permanent fixture in the Koggestraat (scheduled to open in June). Back in the day, the Dikke Lepel ladies were (and possibly still are) running WinkWink dinners – so called because they were ‘culinary one-night stands’ – from an Oud-West apartment. While, more recently, Claire Sullivan of My Table fame has been the talk of the town (and a highlight of this blog) at the People’s Place. With the end of her current series just last week, however, the next pop-up will no doubt be somewhere entirely different.

Another name to watch is Madame Charlotte, who throws down a couple of trestle tables in her catering studio once a month and serves up a four-course fixed menu to her group of a dozen or so lucky guests for just €35. The evening I booked in, we were treated to fish cakes, spiced aubergine soup, lamb chops, rhubarb hangop, and more interesting foodie conversations than I could shake a foraging stick at. 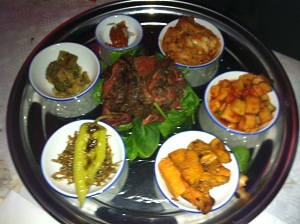 My latest exciting pop-up experience took place at Roest on Friday night. Domingo (of Korean Taco Party fame) and friends served up a surprise Korean tasting menu plus a welcome drink for just €25. The venue, which is not far from the Piet Heintunnel and satisfyingly difficult to find (obviously you want to feel like only a handful of people are in the know when you’re cool enough to go pop-up hunting) would be great in summer but was bitterly cold in Amsterdam’s mythical ‘spring’ weather. Fortunately, the food was worth the four hours I spent shivering in my coat. I lost track of courses, and I don’t think that’s really the point of Korean food anyway. We ate DIY lettuce rolls filled with oysters, pork, tofu and various sauces. We ate soups full of seafood, mushrooms and noodles. We ate kimchi till our lips burnt, sweet potato, barbecued beef, cuttlefish, aubergine… the list went on. The event itself was called Yokiyo; don’t ask me what it means or where it might pop up next, but look out for it and make a booking. Trust me on this one. 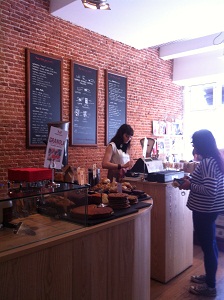 Today, I beelined first to cool-kid-on-the-block Two for Joy for their own-roasted coffee, before heading over to the Westergasfabriek for the monthly NeighbourFood Market. There, I stopped by the fabulous Bao Project for an Asian pork slider; a food truck in the shape of a red van selling filled, warm bread in mini, terracotta flower pots (as you do); and the aforementioned My Table‘s stall for a bowl of steaming laksa. I am sated. For now, at least. 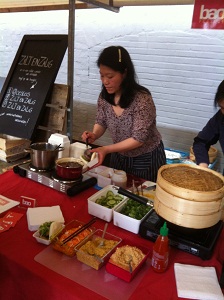 There will always be a time and a place for established restaurants with a fixed address, where you can choose from a menu, order from a wine list, and talk only to your dinner date on a cosy table for two. But for those other times and other places, Amsterdam’s food scene is feeling mightily hip right now. Trending times indeed…