Friday was a very exciting day in my little world of food writing. I got the first reservation on the first day of the opening of new restaurant/cocktail bar Tales & Spirits. Ha. That means that even if Johannes van Dam went in the very next day, the review won’t come out in Het Parool for at least a week. Time Out can’t cover it until the start of December, at the very earliest. This is where bloggers have the upper hand. On the food writers’ unwritten, un-spoken-of scale of Review Exclusivity, I just scored 11 out of 10. I win. Yes [pumps air with fist].

So anyway. After all that self-congratulating, what was it like? I started with a cocktail: Little Miss Trouble sounded like an appropriate way to begin a Friday night. The Honey Badger had a Bols Swizzle. They were fresh and fruity and easy to drink, but not as grown-up as I like my liquor. 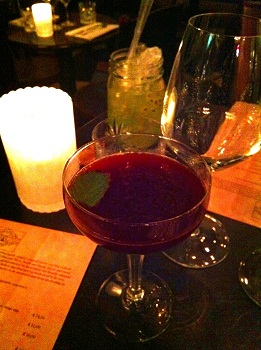 The menu featured a dozen or so small dishes, so we ordered two each. Surprisingly, the food was much, much more grown-up than the cocktails. It was the kind of food I’d struggle to make myself – in some cases I wouldn’t know where to start. The kind of food that would make me curious to meet the chef – and nervous that I might develop an inappropriate crush if I did.

I started with steak tartar, which was more puréed than chopped – closer to filet americain in texture. But the flavours were spot on, and the accompanying dollops of piccalilli jelly, anchovy mayonnaise and truffle butter were intense taste-explosions that punctuated the beef. 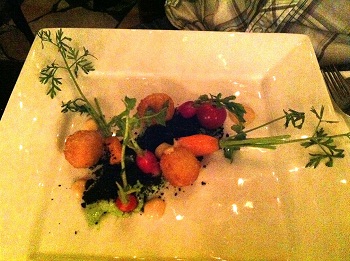 It was the Honey Badger’s first course, however, that really blew me away. It didn’t look all that on the menu: crudités with some kind of mayo-based dip, rye bread and bitterballen. What arrived looked like one of those mini Japanese zen gardens: the raw carrots, radishes and tomatoes were sprouting from a green (miso) mousse, topped with earth made from a malty rye crumble. The bitterballen were filled with a sweet, smooth mouthful of carrot and ginger purée. I couldn’t get enough of it. Which was unfortunate for my boyfriend who had actually ordered it. 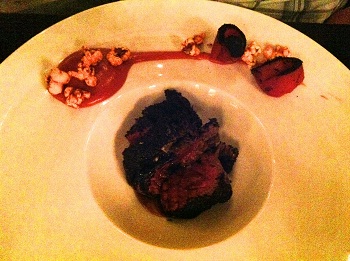 He lucked out on the second course too: perfectly medium-rare flank steak rolled in what tasted like smoked tea. It was accompanied by a roasted red pepper purée (which to me tasted like Piquillos – faintly smoky, charred, sweet-savoury Spanish peppers that are possibly the nicest thing you can buy in a tin), more peppers rolled in the tea, and paprika popcorn – awesomely awesome and cool beans. I was Impressed with the capital I. 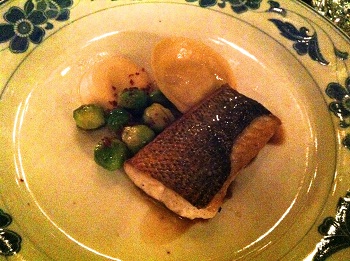 Meanwhile, I had sea bass with a single ravioli (raviolo?) filled with a silky, white, sweet onion cream that tasted faintly fungal at the same time. Also present at the party were a few Brussels sprouts dusted with bacon powder (yes, bacon can be elegant too!) and parsnip purée. It was delicious, but not as sexy as the dish on the opposite side of the table from me.

We rounded off dinner with another cocktail: continuing the theme, I plumped for the Fallen Lady whose dark fruit flavours were offset by a dusting of chocolate and black pepper. The Honey Badger’s Ouwe Hoeren was pale pink and sticky-sweet and not my thing at all. But it was served in a glass the shape of which (I’ve heard) is modeled on Marie Antoinette’s breasts – no prizes for guessing what the pink cherry at the bottom symbolized, then.

Dinner was served by a waitress who was as attentive and adorable as she was clueless about what she was serving. But after only a day in the job, you can’t really blame her. And besides, the knowledge will come with time and experience – a friendly smile can’t be taught, or underestimated.

We paid around €65 each, although most of that came from drinks (I forgot to mention the bottle of Spanish Merlot we had in between) – the dishes themselves were only €12-14 each. The venue is cosy if rather self-conscious (the bar staff were wearing those thin ties and one even sported a proper hipster trilby), with an attention to detail that the control freaks among us would appreciate. And the location is such that Tales & Spirits will attract passing tourist trade as well as Amsterdammers. Even on its first night open to the public, the restaurant was approaching full and the table next to ours turned over three different sets of customers in the four hours we were there.

So, you heard it here first: go now before they either put their prices up or the chef gets poached by somewhere with stars. Tales & Spirits is one for the to-do list.