There are a few (and only a few, mind) disadvantages to being a food blogger. One of them is that if you’re feeling poor (which, believe me, is a familiar feeling for a foodie) you can’t save money by eating spaghetti hoops out of a tin. The other is that people never invite you over for dinner. I try to reassure them by saying that if I’m not paying for it, I’m not reviewing it. But I still seem to make them very nervous… 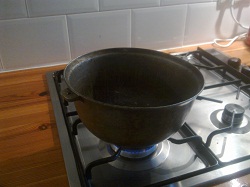 Still, one brave soul promised me ‘five-minute student cous cous’ and a DVD, and I was determined to be gracious about it. Only then he got out the ingredients (most of which came from a tin) and started telling me what he was going to do with them (primarily boiling them, despite the tuna, peas and carrots being pre-cooked and – lest you forgot – already from a tin), and I got a bit worried. 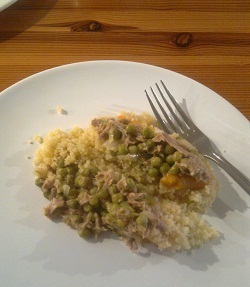 I took some photos of this masterpiece and the pot he cooked it in (which was very nice, in fact – it comes from Moldova, apparently). And, just for good measure, the view from his apartment – largely because I liked the juxtaposition of the old-style window frame and the modern architecture of the car park opposite. 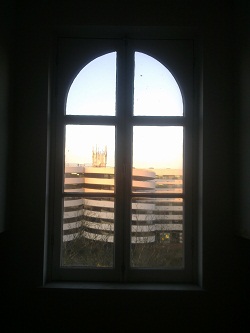 And then we went and got takeaway.

I’d never been to the restaurant half of Rakang on the Elandsgracht, and I still can’t tell you what it’s like, but I can tell you about the takeaway half – and presumably it’s the same chef. It’s the kind of takeaway joint with a big chill cabinet full of dishes that are then re-heated once you’ve made your choice. This sounds simple enough, but we managed to make it horribly complicated through trying to order one of the special menus plus à la carte extras; only there was some miscommunication over which special menu we were ordering and which extras. The Thai woman at the counter was immensely patient with us, however, as was the rather attractive Brazilian man in the queue behind us. 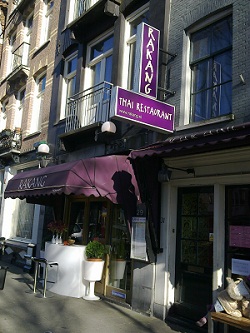 By the time we’d ironed out the confusion, attempted (pathetically) to make flirtatious conversation with Brazilians and got dinner home, it was fairly luke warm, but I wasn’t about to ask Mr Moldova to fire up his microwave. God knows what might have ensued. The green chicken curry was sweet and coconut-y, though lacking in chilli heat, while the beef and chicken specials had gooey sweet-savoury umami flavours. We also had fried rice (which I just love in general), Thai fishcakes (featuring plenty of fragrant lime leaves) and spring rolls (fairly average). All for about €15.

I realise that this review is doing little to reassure any of you who might be considering inviting me to a dinner party. But I really will be very well behaved if you do, I promise. And I genuinely do appreciate people taking the trouble to cook for me. Just so long as it doesn’t come out of a can. Ok?

NB: No Moldovans were harmed in the making of this post. The Moldovan in question did – in fact – suggest writing this as introduction to the restaurant. So you see I’m not just a callous critic…