I’ve always been a fan of Ron Blaauw. I liked his down-to-earth gruffness when I interviewed him in his restaurant in Oudekerk years ago. I liked his unapologetic fine dining at Ron Blaauw Amsterdam, the first iteration of his restaurant on the Sophialaan. And I still like him at his new concept – the pared-down, fuss-free gastrobar at the same Oud-Zuid location.

The occasion was an anniversary dinner: myself and the oft-quoted Honey Badger, to be precise. We wanted somewhere special, but not formal. And Mr Blaauw’s enthusiastic but utterly unpretentious serving staff set the evening off to a flying start. As did the glass of Cava and the platter of Brandt & Levi sausages (although the quality of the mustard stole the show on that one, it has to be said). 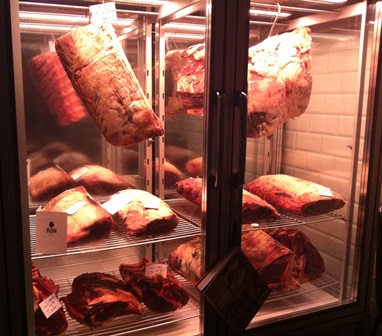 The menu offers a couple of dozen small dishes, all priced at €15 (except for the astronomical beef menu – amusingly named “Ron’s Meat” – at upwards of €90 for two). You’re advised to order three per person (which was fine for two people with hearty appetites) but they can be brought to your table in whatever order you like, meaning that dinner doesn’t descend into a free-for-all tapas affair (unless of course you want it to).

We started with the cold dishes: pâté de foie gras (nothing unusual in itself) with a sensational combination of sweet-citrusy barbecued lemon gel, the sour crunch of green apple, the sensorial trickery of liquorice “snow”, and the fragrance of cloves and nutmeg infusing various edible petals. Amazeballs, as they say. The so-called “ravioli” of lobster was good too – so-called because it was actually made of puff pastry, rather than pasta. The lobster was paired with a gingery brunoise of Thai flavours and a seafood jus. 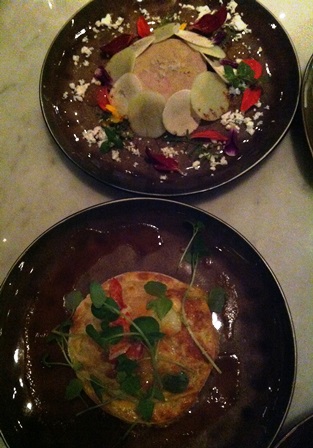 Our hot dishes included a smoky barbecued white cabbage dish that I will force someone who owns a barbecue to attempt to recreate for me; it was served with delicate discs of bone marrow and a cream of oyster plant – a little too rich for the already voluptuous bone marrow. The wild duck with black pudding was veering towards dry, but the red cabbage on the side made up for it. (Cabbage and barbecuing seemed to be a theme!) The king crab legs came with the lightest, dreamiest potato purée and a luxuriously creamy seafood bisque.

I couldn’t quit, however, without first trying dessert: a yuzu parfait with avocado sorbet (almost ice cream-like in texture because of the rich avocado), coconut foam and a yuzu meringue. Exotic and palate-tingling.

Including the aperitif and a bottle of wine between us, dinner came to €80 each including tip – which (and I’ve just checked my previous review) is almost €50 less than it cost me last time. When it comes to making fine dining affordable, Mr Blaauw is the business. RON Gastrobar is a triumph.