Spring has officially sprung. The Westerpark’s trees are in blossom, the clocks have gone forward, the temperature has been consistently in double figures for at least a week… All that’s left is to dust the winter off my grill and spring will have morphed into my favourite time of year: BBQ season! I’ve only been properly grilling in Amsterdam for the past two summers because I didn’t have any outdoor space until 2015. Since then, however, barbecuing has become our favourite weekend hobby, so it’s time to answer the seriously tasty questions: I present: The Ultimate Amsterdam BBQ Guide. Over the coming weeks, I’ll be answering all these questions and more in this multi-part guide. Happy grilling! 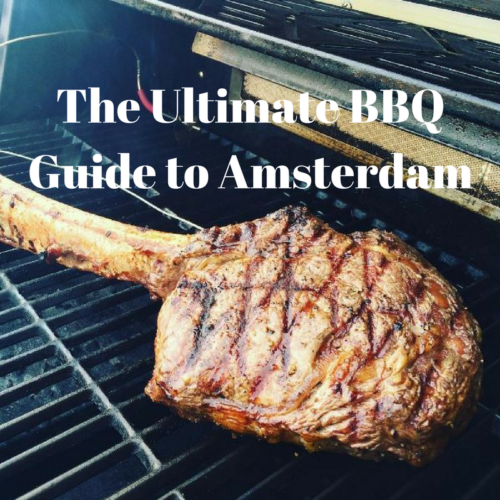 Where to Buy BBQ Supplies in Amsterdam

To get set up as a grill master, you’re going to need a grill. We chose a charcoal BBQ because we like cooking rituals that take ages and make you messy (we also think the food tastes better). But if you’d like a little less faff (and especially if you have kids), feel free to go gas – it’s quicker and cleaner. If you do get a charcoal grill, you’re going to want a chimney: it’s basically a metal cone in which you can stack your coals, light the bottom of them, wait 5-10 mins for most of them to catch, and then dump them out into your grill. Much, much more effective than any other lighting method.

A note about charcoal: some people prefer the charcoal that looks like chunks of burnt wood. Personally, I find that stuff burns too quickly and is more liable to break off into small flakes that can make your food sooty and your deck dirty. I prefer charcoal briquettes, which sort of look like cookies of compressed coal. They burn for longer and are a bit less messy. Whatever you do, don’t buy the “quick-light” charcoal. It’s full of chemicals, and if you’re not careful to burn them all off, they’re going straight into your dinner. You can tell just by the smell that they’re bad news.

I’ve always loved a good garden centre, despite not being remotely green-fingered. I think it’s the smell. Anyway, discovering there was something in garden centres that I could actually do – namely, BBQ – made them all the better. Intratuin sells several good gas and charcoal grills, as well as all the wood chips, charcoal/briquettes, BBQ gloves, grilling equipment and general paraphernalia you could ever need. It’s not cheap, but it’s good quality, and the people doing the customer service are knowledgeable too.

Admittedly, I’ve only recently come across Barbecueshop, but it calls itself the biggest BBQ store in the Netherlands, and my grill-master friend Jeroen bought his BBQ there because it was competitively priced, which is good enough for me. They not only sell grills and grilling equipment; they also sell meat! (Though I’m not sure of the quality yet.)

Whatever you plan to cook and whichever grill you plan to cook it on, do yourself a favour and buy an iGrill; it was literally life-changing for us. This high-tech digital thermometer comes with two temperature probes (but it’s a good idea to buy extras) that you can use to monitor the temperature of your food throughout the entire cook. Just stick the probe into your meat or fish at the start, tell the iGrill what it is you’re cooking (e.g. salmon steak, Boston Butt), and let the app on your phone/tablet tell you when it’s up to temperature. You can also set a temperature yourself – so if you want to check in on a low and slow cook part-way through (for example, so you can wrap it, a la Texas Crutch), the iGrill makes all that very easy as well. Plus, the ambient probe means you can keep your grill at one steady temperature for a long time: set parameters for the maximum and minimum temperature of your BBQ, and the iGrill will alert you when you need to open vents or add more coals. It really is genius, and makes the whole cooking process much more relaxing – so you can stand around drinking beer and listening to country music instead of taking the lid off your BBQ every five minutes. Which, by the way, is a bad idea. In the words of the experts: “If you’re lookin’, you ain’t cookin’.”

Yup, they also sell the iGrill on Barbecueshop’s website.

Although their BBQ ranges are less extensive than Intratuin’s, Gamma and Praxis still sell good charcoal, briquettes, gas canisters and chimneys. Good for re-stocking your supplies between grill sessions. There are three Gamma stores in Amsterdam, the most central of which is on the Nieuwe Hemweg near Westerpark. There are three Praxis stores in Amsterdam – two in West, one in Zuid.

If you’re already thinking about your weekend BBQ plans on a Monday (or even on a Thursday), then your best bet may be to order your meat online – especially if you’re looking for a large cut. We’ve tried Beef & Steak’s Boston Butt (to make pulled pork), beef brisket (video below), pork ribs, and various forms of steak – with good experiences every time.

In summer, a lot of Dutch supermarkets seem to sell cheap charcoal and briquettes. This stuff is fine for shorter cooks; for longer cooks, I’d recommend better quality briquettes. When it comes to the meat, fish and veges to throw on your barbie, not all supermarkets are created equal. If you aren’t able to get to your local butcher, we’ve found that the meat (especially the steak) at Jumbo is superior to that at Albert Heijn. I’m not always sure Marqt is worth the extra money…

If all else fails and your grilling skills turn out to leave a little to be desired, you can always order in BBQ. In fact, this might be a good option in any case if you have a large party of people coming over and don’t want to spend your entire time getting smoke in your eyes. Disclaimer: I’ve not actually tried BBQ & Gourmet, but they seem to be the only one of their kind offering BBQ catering to large groups. And that can’t be a bad thing!