When I started this blog back in 2007, it was just me and a couple of other food geeks sitting in our bedrooms writing down our personal thoughts, safe in the knowledge that very few people other than our mums and best friends were ever going to read them. None of the restaurants knew who we were, PR agencies probably existed but they didn’t know who we were either, and Facebook was a place where we connected with approximately 10 friends – not with bloggers, that was for sure. The reason I started a blog was purely as an outlet to be creative about the two things I enjoy the most: food and writing. It was a place where I could blather on about whatever I liked, and there was no client or manager or editor who could mess with my copy. There were no feedback processes, no approvals, no one else’s opinion but mine. Nowadays, my reasons for blogging haven’t changed much. But the industry has – beyond belief. The one thing that hasn’t changed much, though, is the financial model. Back in the day (and indeed still), businesses would target journalists, and those journalists were being paid by the publications they wrote for. Nowadays, businesses target bloggers as well, but those bloggers are being paid by… no one. It’s not surprising, then, that a lot of bloggers have started asking for money (or at least, payment in kind) in exchange for writing about those businesses’ products, venues or services. Some of us have never asked for it, but find ourselves being offered it all the same.

And here’s the thing: while all of this is perfectly understandable – logical, even – it’s not in the spirit of why many of us started blogging in the first place. Not only that: it creates a dilemma. Can you objectively judge something that you haven’t paid for? How can you be sure that the experience you’re getting is the same as the one Joe Public will get two days later? How can you write a recommendation for something you like – but, worse still, how can you criticise something you don’t like – if you’re being paid to write about it?

One answer, of course, is simply to refuse all freebies point-blank. I’ve done this a lot, and believe me when I tell you that I’ve spent far more hours of my life turning down invitations than I have accepting them (I could probably count the “acceptances” on the fingers of my hands – a tiny percentage of the 500-ish restaurants I’ve reviewed in total). “Luxury problem!” I hear you cry – and you’d be right. But it’s not much fun saying no to people all the time.

On the other end of the spectrum, you’ve got the bloggers who milk the business for all it’s worth. This is fine when you know that every damn thing they write about is being paid for – but the problem is that the reading public often don’t. Let’s move on before I get bitter and start naming names.

Most bloggers, of course, fall somewhere in between. You’d be a fool to start doing any of this for the money, so let’s assume there’s at least passion and conviction behind the words on the website. They don’t get paid, but they do accept freebies – it seems to be the nature of the modern blogging beast. They generally only write about the positives, and if they have bad experiences they mostly leave them out altogether.

The problem for me, though, is this: my blog isn’t built on being positive about things. It’s built on being honest about things. It says it in the tagline: restaurant reviews. And by definition, a review looks critically at the thing it’s reviewing. But both readers and PR reps alike still expect me to cover the new openings, the “hotspots”, the food-related events, the workshops, the pop-ups… not only is it impossible for all these to come out of my own pocket, but such things are so new – so transient – that my experience today will be radically different from what a customer six months down the line will experience anyway. 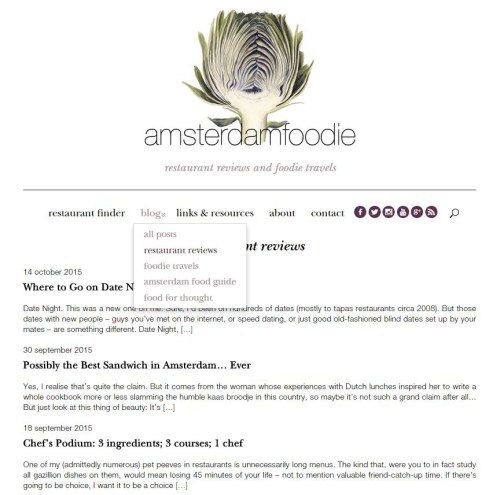 So I’ve come up with an idea: one of the benefits of blogs is that they have categories. So far, Amsterdam Foodie has four categories, one of which is restaurant reviews. What’s stopping me adding a new category? One in which I don’t give a place a rating – I simply put its “newness” in the spotlight. And what should that category be called? “Press-ing News” perhaps, or “Hot Off the Press”? As a reader, would you still value this kind of content? How else could I make the difference clear, so as not to mislead you?

This is a genuine dilemma that has been nagging at me for about three years now – ever since marketeers started taking bloggers seriously, I guess. When I started writing this post, a clean document open in front of me, I’d intended it to be about Ali Amsterdam, GIN Neo Bistro and Shirkhan – all places to which I’d been invited for workshops or press lunches over the past few months. But I found I couldn’t start writing until I’d solved this. I need your opinion. If you respect independent “journalism” (if you can call blogs that), and if you’ve trusted my objectivity in the past, I want to hear your thoughts. Leave me a comment – here or on my social media; write me an email; send me a note via carrier pigeon. I value what you think. Thank you.