Every Monday I cycle up the Bilderdijkskade from my Bollywood dance class (see – there’s something you didn’t know about me!) and for the last few weeks my eye was caught by this glass-fronted, swish-looking foodie place. Was it a supermarket? Was it a takeaway? No, it was… Bilder & De Clercq.

The store, seemingly named after its own geographical coordinates, kept nagging at me until I resorted to the fount of all foodie knowledge: Facebook. A quick stalking of Bilder & De Clercq’s page revealed the most important thing you need to know about its concept: the Menu of the Week. Fourteen dishes are on offer – not as ready meals or takeaways, but as a set of fresh ingredients pre-divided into the right quantities for two people. You just turn up, pick one you like the look of, and throw a recipe card and the food loot into a bag. You can even vote for your favourite online afterwards, if you’re so minded. 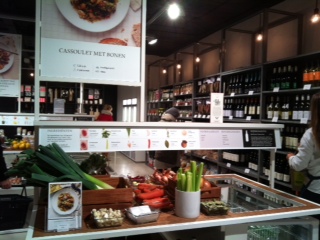 In my case, it was a Monday night after a fairly unhealthy weekend, so I went for the chickpea and spinach curry with naan bread – full of anti-oxidising garlic, ginger, spices and irony spinach. (Although I was definitely torn between that and the bean cassoulet, which looked like Saturday-night-sausage heaven.) The helpfully portioned-out ingredients made it ludicrously simple to make (and apparently they will also give you English recipe cards if you ask), and even my carnivorous boyfriend was left feeling food-baby satisfied. 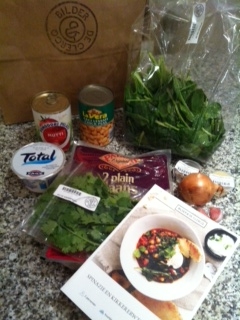 Each dish quotes the per-person price (around €6-8), which may be higher than you’d pay at the supermarket, but there are many many reasons why Bilder & De Clercq makes it worth the price tag. I love a good bullet-point list, so here goes:

• The ingredients are far superior – I don’t think they all claim to be organic, but they are as locally sourced as possible. Everything sings with freshness and, like I said, those cassoulet sausages looked like pork paradise…

• There’s no risk of that annoying situation where you end up buying an entire bunch of celery when all you actually need for the dish you’re making is one stick. Here, you just buy the one stick – genius!

• It’s still real cooking. Ok, so someone already figured out how much of everything you need to buy and put it all in one place – so what? I like the cooking bit much more than I like the shopping bit, don’t you?

• The menu changes every week (well, duh! It’s called a Menu of the Week, Vicky!), which means there’s a constant source of new inspiration for that age-old question: what do I want for dinner?

• No one is trying to stack shelves around you, and no one is putting other people’s groceries on top of yours at the checkout while you’re still trying to bag them up. (You’re with me on this one, right?)

We’ve seen convenience stores; we’ve seen hypermarkets; we’ve seen online food shopping, home delivery, pick-up points… Ladies and gentlemen, I put to you: Bilder & De Clercq is the new black in grocery shopping. My only issue now is how I’m going to get back there in time to snaffle that sausage cassoulet before it disappears off the menu…