Foraging is the coolest thing ever. Just saying. I mean, gathering food from the wild – all natural and for free? That’s pretty damn cool.

And yet, weirdly, I’d never done it before. Not until last Sunday, when I met up with Urban Herbology guru Lynn Shore and a crew of like-minded foragers (most of whom seemed to have considerably more experience than me – not that that would’ve been difficult) in a rather grey and drizzly Frankendael Park. The closest I’d ever come to Frankendael before was de Kas, whose restaurant, greenhouse and garden occupy one corner of it. But the park is so much more than that: semi-wild, wooded, and brimming with edible plant life. Magic.

At the end of my crash course in foraging, I’m still not sure I’m really confident enough to go around feeding myself from my local park, not least because all the poisonous plants looked (to the untrained eye) exactly the same as all the edible plants. Net result: I might get dinner, or I might get very sick.

Herbal identification, however, was clearly not a problem for the folks behind the menu at Merkelbach: the restaurant housed in part of the rather grand Frankendael House, whose wild-meets-manicured herb garden spills into the park behind it. Given the fragrant leaves and flowers that adorned our Sunday lunch, I can only guess that their provenance was as local as you can get. 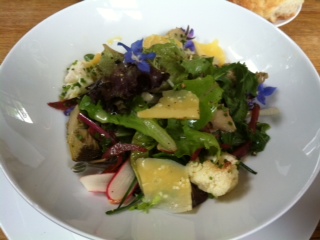 We tried two salads, both of which were fresh and exquisite. My favourite was made up of marinated artichoke, cauliflower florets, shavings of parmesan, thinly sliced radishes, smoked almonds, and various salad leaves and flowers. 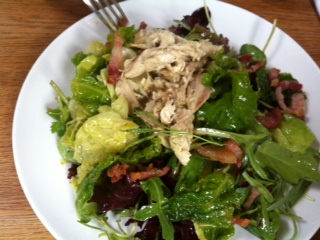 The second was with curly-leaved cabbage, bacon strips, poached chicken and tarragon. Both were perfectly dressed (the leaves coated but not swimming in oil) and came with pleasantly chewy bread rolls. Lunch, including coffees, came to €15 each, which felt neither cheap nor expensive. And I’d happily go back for dinner next time. In fact, maybe I’ll pop in again after my next foraging adventure…